Twitch brings gamers together in a time where we are apart 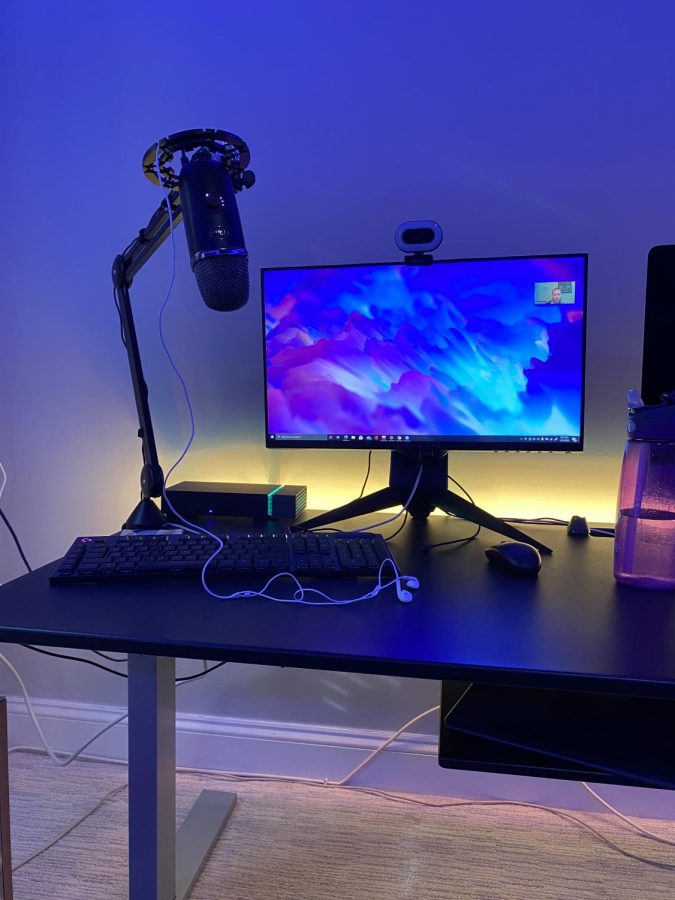 Casey Meretta's streaming set up is under construction at the moment. However, even the simplest set up allows for him to share his content with his viewers.

Being bound to our homes and computers has inevitably increased the time spent behind our  screens. The extra time we choose to spend during dull days has led to social platforms like Twitch to have a resurgence in popularity among a variety of age groups. Twitch is an online service that allows people to watch or stream digital video broadcasts.

Viewership on Twitch has increased by over a million average viewers since February 2020, and the number of monthly broadcasters has doubled from 3.6 million since the end of 2019 into 2020.

Not only has the number of viewers increased, but many have diverted their attention and free time to streaming content — whether that be gaming, political commentary or just hanging out.

“Twitch was the first platform that successfully allowed people to stream, and for that reason many gamers surged to it, bringing their following as well,” junior Alan Misura said.

Other social media platforms are major contributors to drawing attention towards sites like Twitch. Clips from live streams often get published on YouTube, Instagram and other platforms that attract large groups of users.

“I discovered Twitch from youtubers who would shout out their socials,” Misura said. “Minecraft content, specifically hardcore lets plays.”

Unable to go out, gamers and people of all different age groups have turned to creating content to fill their time — a plus being that it is possible to make money simultaneously. Twitch offers the opportunity for its users to make revenue from streaming content through live donations, sponsorships and advertisements.

“I always loved to play games with my friends and I was consistently told that I was funny and would make a good online personality that they would enjoy watching,” junior Casey Meretta said.

Many others like Meretta have put some of their free time into wanting to share their gameplays and commentary. According to Twitch Tracker, the number of active streamers on the site has increased by two million since the month of June 2020.

“I feel that people being at home and more limited on the things they can do resulted in more of them discovering Twitch,” Meretta said. “Twitch feels much more interactive and has a much more community-like feel to it than other social media platforms.”

The concept of being live gathers people from all over the world at the same time in one place. This allows for people to bond over topics they like, as well as reacting to media at the same time as others.

“What they do very well is how they let the watcher interact with the streamer,” Misura said. “These are things like text to speech messages, subscription badges, channel points and so on.”

The chat and donation features allow viewers to interact with streamers which can be extremely important to building a community. With other platforms like YouTube, the community does not feel as genuine since you cannot interact with the creator or others who may share the same interest at the same time.

“Twitch is different from other social media platforms mainly because of the community,” Misura said. “There are other streaming services like YouTube and Facebook live and all three do essentially the same thing, but what makes Twitch stand apart is that they have a culture and community built from years of streamers using their platform.”