Churchill for Climate raises awareness for a hot issue 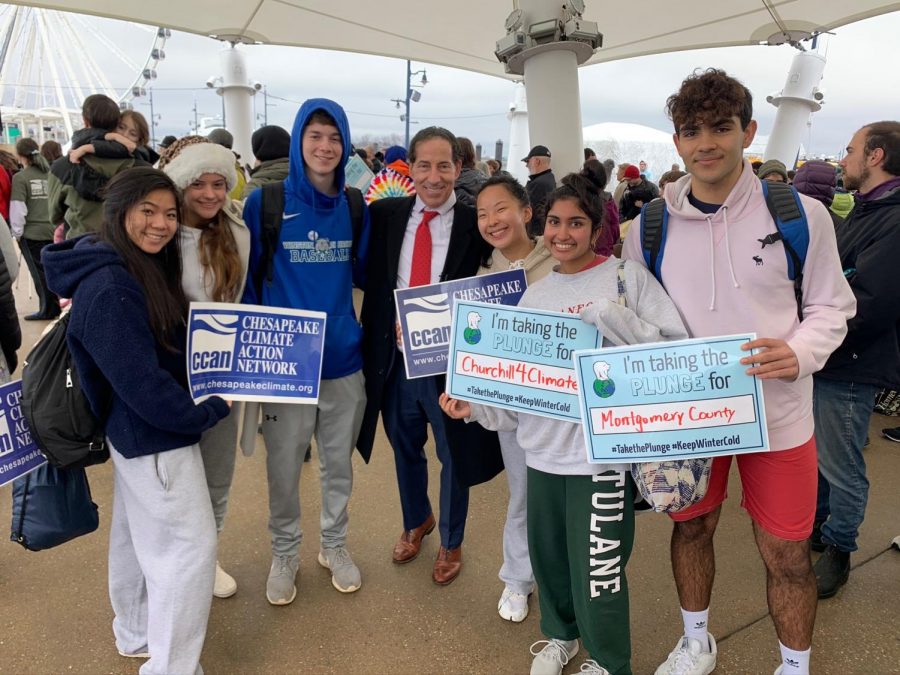 Churchill for Climate members smile with representative Jamie Raskin, as they hold posters with reasons as to why they participated in the polar plunge

Each month, the club hosts two meetings to update students on the climate and any issues that might have appeared since the last club meeting. Along with hosting the meetings, the club also runs activities that benefit the environment or bring awareness to climate change.

The first major initiative hosted by the club was the showing of “Racing Extinction” in the WCHS auditorium. The head of Lunchskins, Kirsten Quigley, sponsored the event, invited panel speakers and rented the auditorium for students to watch on their Saturday morning.

“Racing Extinction” is a documentary about the mass extinction that is being caused by humans and everything that is being done to stop it, or at least record it, by scientists, activists and journalists. The goal of showing the film was to show students, in a simple and entertaining form, what is happening to the earth and inspire them to do something to stop it.

“I was only able to go to the movie for a little,” junior class president Maeve McGuire said. “But when I was there, the movie was actually really interesting and scary in a way.”

Another action taken by the club was a waste sort: a way of figuring out what the makeup of most trash items in the schools are. The club hosted two waste sorts, one at WCHS and one at Bells Mill Elementary School.

“We took a bunch of the trash cans and dumped them out, then sorted them into things that were recyclable, just trash or compostable,” Fan said. “We found that around 50 percent of everything we sorted was organic and compostable.”

“It was really eye-opening,” McGuire said. “I didn’t realize how so much of the trash students throw out is not actually bad for the environment, they are just being thrown into the wrong places.”

As a way to help students sort their trash better, Churchill for Climate is getting compost bins added to the cafeteria. This way, students can throw out their leftover food and trash in the right bins, and take part in making a simple change.

The last major initiative that the club did was attend the Polar Plunge. The Polar Plunge is an event done all over the country, where donors pledge money for participants to jump into a body of water during the winter to raise awareness for environmental issues. The club brought about 10 students and raised around 3,800 dollars.

“It was actually really fun,” McGuire said. “Most people might be intimidated by how cold it is, but you were only in the water for a few moments, and then you could get a towel and warm up. It was also really rewarding knowing that something so easy to do was making such a difference.”

Overall, Churchill for Climate is making a big impact not only on the community but on the climate. With actions to get a Wellness Day focused on environmental activism and hanging up posters to bring attention to their cause, they are helping WCHS become more environmentally friendly.

“I love being apart of the club,” McGuire said. “It is just really nice to know that whenever I am involved with them, I am doing something to help the planet and be a better person.”