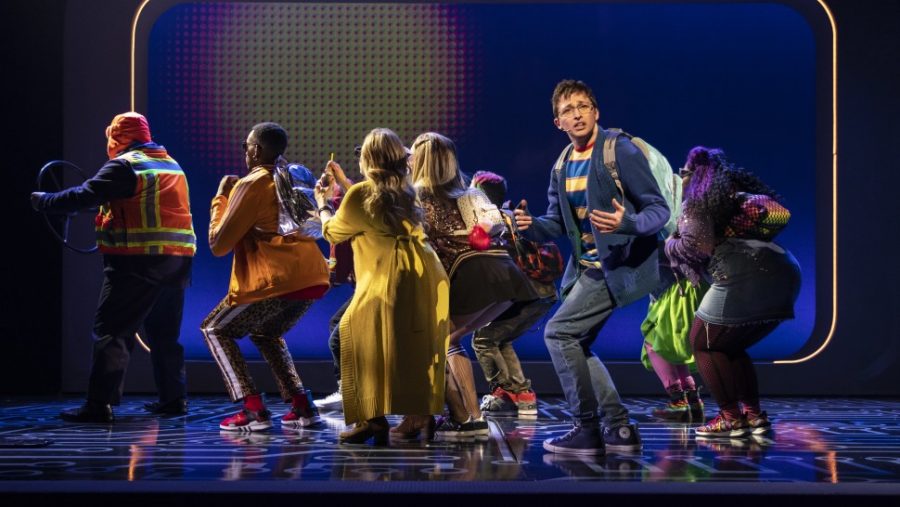 Will Roland stars as a highs chool student in "Be More Chill" on Broadway.

A Broadway musical review seems a far off discussion for a piece in a Potomac high school’s newspaper. A science fiction comedy makes for an even less likely candidate.

However, the new musical “Be More Chill” presents an ever relevant and relatable perspective on the modern high school experience. Its focus on self-consciousness, insecurity, “fitting in” and being an outcast suit any age range, with the exception of some PG-13 material associated with high schoolers. The characters portray the high school experience with laugh out loud humor and the elements of science fiction, which are enhanced with great visuals.

The show begins with “nerd” Jeremy (Will Roland) who wants nothing more but to survive the difficult days of high school. Roland’s previous go around with this type of part was in Tony winner “Dear Evan Hansen,” in which he played Ben Platt’s supporting friend. Now, he takes on the lead role and does not disappoint.

In his desperation, Jeremy finds an easy way out of the terrible life he has been living–the squip. The squip (Jason Tam) is a mind controlling computer chip that helps individuals to be cool or ‘more chill.’ Once Jeremy takes it, everything changes.

Although, this does not necessarily mean for the better, and ultimately, both Jeremy and the audience receive a lesson in friendship, romance and self confidence. The universally applicable theme: life is hard, and the easy way out is not always so easy.

Moreover, what makes it all the more relevant to WCHS is its depictions and ideas about high school. The popular kids turn out to not be so perfect, and the “losers” don’t always have to be losers. To thrive, one simply needs an ample support system, which in Jeremy’s case from the start consists of his best friend and his father, and the right amount of self-sourced self confidence.

In the digital age, the importance of self-image and appearances have grown critical for teenagers across the world. Keeping up with social media and one’s virtual persona is essential. However, a number of teenagers still feel disillusioned and lost all the same. The idea of the “little guy” or “underdog” is common throughout film and media, and has been for ages. The musical’s reminder to take a step back, to think about how everyone struggles with something and to appreciate everything we do have is presented in a fresh and understandable light.

In all, Broadway’s new “Be More Chill” offers an interesting and important stance on appearances, self confidence and the present day high school experience by means of well executed humor, great vocals and the right touch of science fiction.