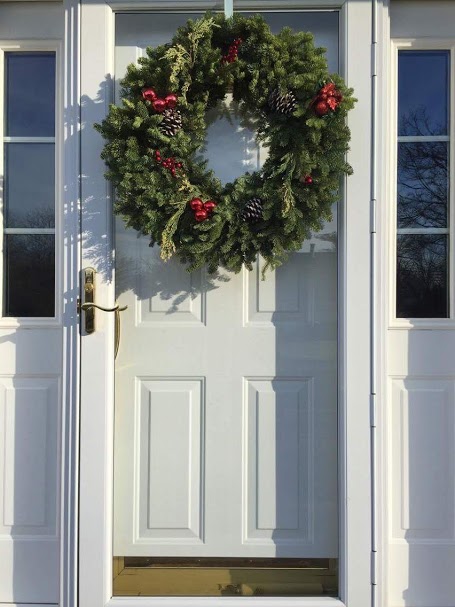 A wreath is pictured on the door of a house in Potomac, Maryland.

Christmas wreaths were put up around CHS, on Monday Nov. 28, and they were taken down two days later.

The wreaths were displayed on the outside classrooms and department and administrative office doors. School business manager Lisa Wellek was in charge of the wreaths, and when there was concern that they were violating the MCPS policy, “Religious Diversity guidelines.”

It is CHS’s mission to be inclusive and strive to provide a welcoming environment for everyone, and an MCPS policy states that the government may not promote one religion over another, and the wreaths violated both policies.

“I purchased and displayed decorative wreaths within the school as a way to add color and spread some winter cheer,” Wellek said.

With many wreaths put up around CHS, one wreath was put outside of U.S. History teacher Adam Field’s room.

“The one from our classroom door was taken down two days later by Mr. Van Tassell,” Field said.

After all the wreaths were taken down, Wellek sent an email to all of the CHS teachers explaining why they were taken down. It is a requirement that schools must protect the religious liberty rights of all students while rejecting public endorsement of religion.

CHS is not the only place that puts up holiday decorations. Many places have winter/ Christmas decorations, Starbucks gives out red cups and many restaurants have lights and other decorations up. Many CHS students go to Starbucks before school, or during lunch. It is not uncommon to see many red starbucks cups in the halls of CHS.

According to a survey of 37 CHS students, 41 percent believe that that it is unacceptable in to promote Christmas with Christmas decorations, and not other holidays.

According to the survey,  81 percent of students associate a green wreath with a red bow with Christmas.

The wreaths that were placed around CHS were green wreaths with red bows, and there were concerns that the wreaths would offend students and parents, so they were taken down.

On the other hand, almost 90 percent said they don’t feel uncomfortable when they see Christmas decorations in public places.

Holiday decorations are acceptable, but Christmas decorations can make some people feel uncomfortable and left out. Be careful when putting up decorations that you won’t offend anyone, many non-religious decorations have been out up around CHS to ensure that everyone feels safe and comfortable. Many non-religious holiday/ winter decorations, such as bulletin boards around the school have snow flakes or cut outs of people skiing and in playing in the snow.