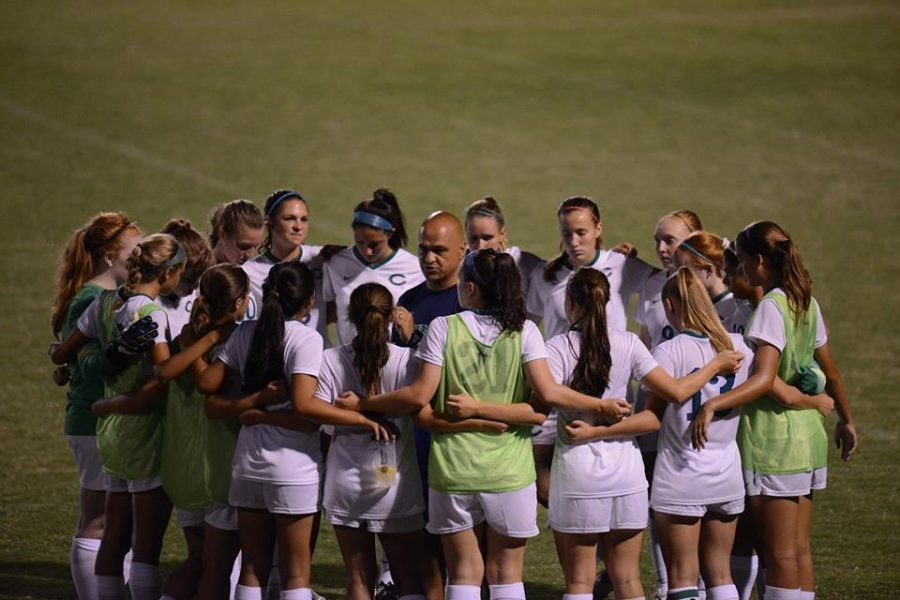 Before a game, the varsity girls soccer team huddles around their coach, Haroot Hakopian. Despite finishing third in the state, fewer CHS fans attend their games compared to the boys soccer games.

This lawsuit has made headlines for further exposing the disparity between how female and male athletes are treated. Unfortunately, wage discrimination is only the tipping point of the struggle for female athletes. Sexism in sports manifests itself through disregard to safety, negative stereotypes and less popularity. However, these issue of mistreatment for female athletes isn’t just occurring on a national level, but also right here at CHS.

Mistreatment and inequality in women’s sports was first addressed on a federal level in 1972, through a law called Title IX, stating that “no person in the United States shall, on the basis of sex, be excluded from participation in, be denied the benefits of, or be subjected to discrimination under any education program or activity receiving federal financial assistance.”

Despite the opportunities that this law has granted for women, negative stereotypes surrounding female athletes are so prevalent throughout society that they affect every aspect of a woman’s sporting experience.

According to March 2016 Time Magazine, regardless of holding a better record than the U.S Men’s Soccer team and bringing in more revenue, the women on the U.S. Soccer team make a mere 40 percent of what their male counterparts make.

Many factors have to be taken into account when one looks at the wage disparity between male and female athletes. In addition to pay per game, individual athletes make money through sponsorships and television appearances.

According to the Time Magazine article, the highest paid female soccer player in the U.S, Alex Morgan, who has endorsements from major companies such as ChapStick and McDonald’s, still makes less money than the average male player makes exclusively from playing games.

“There is no logical justification for this,” girls varsity soccer coach Haroot Hakopian said. “When even famous male soccer players are coming out and saying his is wrong,’ the problem has to be addressed.” Last year, the U.S women’s national soccer team also spoke out against the safety risks that accompany having to play on turf fields.

According to a December 2015 New York Times article, turf fields can cause players to trip, burn themselves when they slide and dive, or cause an even more serious injury.

Despite the serious safety issues accustomed to turf fields, the women’s team still played eight out of their ten games on a turf field during last summers Women’s World Cup while the men’s team were rarely required to play on turf.

Female athletes also constantly have the pressure of disproving negative stereotypes that are prevalent in our society, one major one being that women are less skilled and overall inferior to men when it comes to all sports.

The implication of this catchphrase is that girls are generally not as skilled athletically, which further reinforces the stereotype that girls are weak and less valuable in sports. However, one only has to look as far as our girls varsity soccer team to realize that this stereotype has no merit.

“Whenever I hear people use that phrase, I challenge them to go to one of my practices,” Hakopian said. “Usually, they can’t do it.”

Wage equity may be a unique problem for the professionals, but for female athletes at CHS, the repercussions of this stereotype are manifested through the lack of people who show up to games.

According to the athletes and coaches at CHS, people prefer to go to boys sporting events more, regardless of who has a better record.

“I don’t get to go to very many boys games, but when I do, they are always more crowded than the girls games,” girls varsity basketball player Cat Correa said.

Although the bleachers at the girls soccer semifinals game were crowded, they were not completely full.

“The girls dread having games on nights when there’s a football game,” Hakopian said. “Because no matter how good we play, people will always go to the football game instead.”