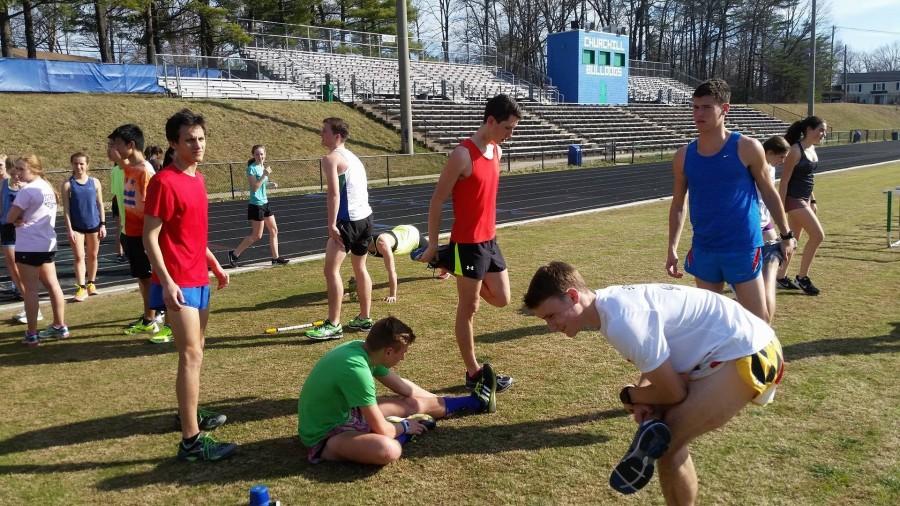 Second from left, senior Mitch Welter, junior Matthew Goldsmith and seniors Michael Hughes and Josh Frielich run as part of the Wolfpack. The close-knit group of distance runners have excelled as a group.

By Peter Durand and Arjun Swaminathan

For some CHS student athletes, distance running is more than a sport; they consider it a way of life. Meet the CHS “Wolfpack.”
The Wolfpack is a group of some of the best runners at CHS who have become close friends through running, on and off the track. The group formed three years ago and has grown since then. The current Wolfpack consists of seniors Mitchell Welter, Thomas Winkert, Michael Hughes, Jason Shefferman, Josh Freilich and Jacob Grant, as well as junior Matthew Goldsmith.
“It all got started when [Class of 2015 alumnus] Brendan Fagan thought it would be a good idea to make a group of guys that weren’t necessarily the best runners, but ones that really wanted to work hard and get the most out of their training,” Welter said.
Welter has gone from being an average runner as a freshman to being arguably the fastest CHS long distance athlete, with a two mile time of 9:52. He credits the Wolfpack for his success.
“Running is something that has grown on me since I started freshman year,” Welter said. “It’s extremely competitive and very rewarding when you hit a good time because you know all that hard work finally paid off. Because of the Wolfpack, we turned a group of decent varsity runners that struggled to make states into the second best 4×800 meter relay in the state. I think that’s pretty inspirational.”
The close bond between these runners began to form during their early formative years, but it took until high school for the group to become truly cohesive.
“Jacob, Jason and I had been best friends since around second or third grade, so we were pretty close from the beginning,” Hughes said. “Mitch and Brendan became close friends near the end of the freshman season, but it wasn’t until our sophomore season that we all really came together.”
This past year, the Wolfpack’s efforts to improve as a unit have been fruitful, as evidenced by their performance in meets in past cross country and indoor track seasons.
“We may not have the fastest individuals, so another school might put one guy ahead of us, but we will get second to seventh,” Hughes said. “In the same way defense wins championships, running depth wins state titles. That’s what makes our team so strong.”
The close relationship of these runners allows them to push each other to work harder every day.
“It’s a classic example of guys who were good, but pretty mediocre before they formed the Wolfpack,” cross country coach Paul Jacobson said. “They have a really good rivalry.”
Jacobson, who ran in high school and college and remains dedicated to his craft, believes that it is quite common for strong runners to form clique-like groups that help them push each other.
“It gets them to love running,” Jacobson said. “Because running doesn’t often get the accolades of other sports, it becomes their thing. They can say, ‘We’re the best in the school.’”
Since the majority of the students in the group are seniors, this outdoor track season likely serves as their final opportunity to represent CHS. However, it’s clear that the connection that they have formed will last well beyond this season.
“Whether it’s the long miles over the summer or toughing it out in the cold months of indoor track, we are always there for each other and it makes it easier when you know that someone always has your back,” Welter said.