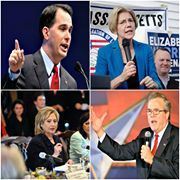 By Ana Faguy and Gil Jacobson

This past fall, voters headed to the polls to cast their ballot in the 2014 midterms, but as the doors closed on the election, another opens: the fast approaching 2016 presidential election.

The political sphere has been buzzing with excitement since contenders started to make their names known as early as 2013. While no major contenders have officially announced their candidacy, a few have ruled out a presidential bid.

According to a January 2015 New York Times article, Mitt Romney, the Republican nominee in 2012, will not be running.

Meanwhile, several CHS students have begun to voice their opinion on desirable qualities in a presidential candidate, the most important issues of the next election and who the candidates will be.

Sophomore Bardia Memar believes that important factors to consider in a presidential candidate include decisiveness and being a model citizen who can represent the values that America stands for.

“I don’t agree with Bush, but he’s a competent moderate and he can work with Democrats,” Dorsey said.  “Clinton is incredibly qualified, and if she runs her campaign well, we could get four to eight years of a skilled negotiator who can pick up where Obama left off.”

Senior Cyrus Schiller agrees with Dorsey about Clinton running on the Democratic side.

“She has widespread appeal and a powerful establishment in fundraising and organization,” Schiller said.

As for the Republicans, Schiller believes that it would benefit the party to nominate a governor.

“[Wisconsin Governor] Scott Walker seems promising for his solid conservative credentials and his ability to be elected in a heartland blue state,” Schiller said.

On the other hand, senior Megan Armstrong does not see Clinton surviving a primary due to her past presidential primary track record and her relationship with the Benghazi scandal.

“However, I find it very likely that she will run when observing her recent comments and when I take into account her past presidential bid,” Armstrong said.

On the Grand Old Party (GOP) side, Armstrong believes Bush, U.S. Senator Marco Rubio and New Jersey Governor Chris Christie to be potential candidates, but feels that Christie will be undermined by the “Bridgegate Scandal,” in which he was accused of closing lanes of traffic on the George Washington Bridge leading to major traffic delays and upsetting commuters.

According to Armstrong, however, the scandal will not be a major deciding factor as Christie also has a history of achieving bipartisanship.  One such example was his response to Hurricane Sandy in 2012 in which he set aside political differences with President Obama in order to effectively provide help to those people living in areas affected by the storm.

Senior David Fitzgerald believes that issue-wise, a candidate’s stance on ObamaCare and tackling the threat of ISIS will be important in determining each party’s candidate.

“As far as candidates go, I will vote for Rubio if he runs because he has support from both parties which will allow things to actually happen,” Fitzgerald said.  “Since the GOP controls the House and Senate, I think a Republican needs to be President so stuff can actually get done.”

For students looking to become more politically involved in the next election cycle, there are a variety of both partisan and nonpartisan opportunities locally available.

According to senior Jackie Spang, students looking for partisan opportunities should contact their candidate’s local campaign headquarters, which is what she did in 2012.

“They are always welcoming and appreciate any help they can get,” Spang said.

AP NSL teacher Lallitha John suggests that students interested in being involved in a nonpartisan manner volunteer with the Montgomery County Board of Elections.  The Board of Elections has several programs for high school students including Future Vote, where students can earn student service learning (SSL) hours.

According to Board of Elections Public Information Officer Margie Roher, Future Vote participants engage in administrative and outreach tasks, in addition to helping election judges at polling centers on Election Day and during early voting.  Students who are 17 and older can also serve as election judges.

“They participate in election judge training and then they can get paid to serve on Election Day,” Roher said.  “Or they could elect to receive SSL hours for that.”

Students interested in participating in either of these Board of Elections programs are encouraged to fill out an online application at 777vote.org.