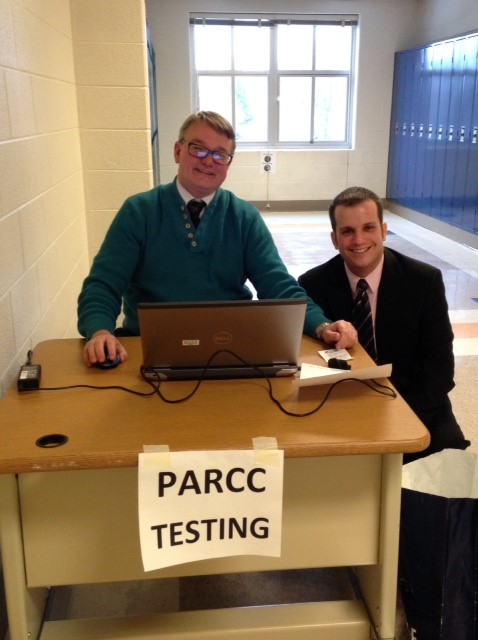 By Emily Wang and Balbina Yang

More than 500 CHS students participated in the Partnership for Assessment of Readiness for College and Careers (PARCC) tests this month.

According to a February 2015 MCPS letter, PARCC provides a better measurement of whether students are prepared for college once they graduate from high school.

“The PARCC assessments are aligned with the Common Core State Standards (CCSS) and will measure the essential literacy and problem-solving skills that students need to be successful in college and careers,” MCPS Public Information Officer Dana Tofig said.

PARCC consists of two components with the Performance Based Assessment (PBA) in March and the End of the Year Assessment (EOY) in late April. Maryland is currently one of 14 states that have implemented PARCC.

The PARCC assessments will eventually replace the High School Assessments (HSA), but this year, students will take the Biology and Government HSAs and Algebra I, Algebra II and English 10 PARCC.

Not only are HSAs being replaced, the manner of taking assessments are changing as well. The PARCC are held electronically on computers or using Chromebooks.

According to assistant Principal Joshua Neuman-Sunshine, taking the tests electronically is the future of testing.

However, the difficulties that come with starting new tests statewide have led to problems with PARCC’s implementation. For instance, students have complained about taking the math portions online.

“The math PARCC assessment was quite frankly, needlessly complicated,” sophomore Eowyn Pak said. “It would’ve been much easier to complete it if it were a paper test instead of a digital one.”

While many days of school were missed due to the PARCC, scheduling was not a problem.

“The snow days pushed testing originally scheduled for March 5 and March 6 to March 9 and March 10,” Neuman-Sunshine said. “We did not have testing scheduled on those days, so it worked well.”

Some students did not know there would be PARCC assessments starting March 3 because of the numerous days missed the week prior due to snow. Thus, the students subsequently missed their tests.

“Only one reminder had been given to us the Friday before the test and nobody alerted me when I followed my normal schedule,” sophomore Alexander Chung said. “I sat in class and didn’t even realize I missed it until lunch when someone told me.”

The main offices informed students who missed the testing the day before to report to testing rooms March 4. To fix additional absences for the math PARCC, makeup assessments took place March 12.

Along with missed notifications, difficulties with the computers lead to students’ inability to take the tests, forcing them to retake it on a different day. For example, sophomore Mory Gould could not take the PARCC test because his login was not working.

“We have had a few minor technical issues working with a new testing program.” Neuman-Sunshine said.

Another unforeseen consequence of PARCC tests was the fact that the computer labs would be unavailable for teachers’ use which affected teaching plans.

“It disrupts the momentum of learning and teaching when a class has to move to a different room or the routine or lesson plans need to be changed to accommodate test schedule,” AP Chinese teacher Yih Lee said. “Students are not able to stay focused and teachers lose precious instructional time.”

Due to the weather conditions affecting school days, students are worried about how much class time they will miss due to PARCC testing. Both the math and English portions are taken over the span of two days, requiring three hours and twenty minutes and five hours for each, respectively.

“I was unfortunately unable to attend the first four periods,” Chung said. “I am now behind in a couple of classes because of missing lessons which can really impact my understanding of a concept.”

With the transition from the HSA to the PARCC, students are wondering about the possible changes in graduation requirements.

According to a MCPS flyer on the PARCC, all students will be required to have taken and passed a HSA or PARCC in the following subjects: Algebra 1, English 10, Biology, and National, State and Local Government. Seniors and juniors taking Algebra 1 or English 10 will take the PARCC, but do not need to pass in order to graduate. Starting in 2016-2017, students enrolled in Algebra 1 or English 10 must take and pass the PARCC as a prerequisite for graduation. Students who took, but did not pass, the HSA in the past will be able to retake the HSAs this year. Seniors this year will still have to pass all HSAs in order to graduate.

“There are no re-takes for PARCC,” Neuman-Sunshine said. “If a student misses the PARCC tests we are holding make-up test sessions.”

Students have commented that this year’s PARCC seemed harder than previous years’ HSAs. The rigor of the PARCC will allow staff to better evaluate the readiness of students for college.

“This being the first full year of PARCC implementation, no one knows exactly what to expect,” Neuman-Sunshine said.