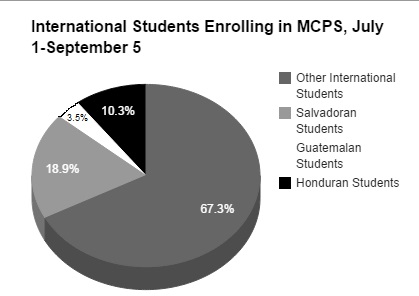 For centuries, people have sought better lives by immigrating to America, and it is no different for the influx of unaccompanied Central American minors newly enrolled in MCPS.

According to Laura Newton, MCPS Director of the Division of School Counseling, Residency, and International Admissions (SCRIA), 330 Salvadoran, 62 Guatemalan, and 179 Honduran students have enrolled in MCPS from July 1 to September 5.  Seventy-eight of these students have enrolled through the Office of Refugee Resettlement (ORR), though none are enrolled at CHS.

“Our data indicates most students are being placed into high school,” Newton said.

These unaccompanied minors also require various supporting services that the schools can offer.

“All of the unaccompanied youth from Honduras, Guatemala, and El Salvador enrolling in MCPS qualify for enrollment in the ESOL program, where they receive instruction in English as a new language, as well as parent engagement and counseling supports,” Newton said.  “Since many of these students enroll in MCPS with limited or no formal schooling, they also qualify for the Multidisciplinary Education Training and Support (METS) program where they receive additional instruction in basic literacy, numeracy, and academic skills, as well as social emotional supports to facilitate their adjustment to a new school environment.”

According to Newton, violence in native countries is a key factor in why these children are choosing to relocate to the United States and enroll in our schools.

“Central American children caught at the U.S.-Mexico border are being sent with relatives or parents to different areas in the United States,” Newton said.  “They are enrolling in the school systems where the relatives have established residency.”

Unaccompanied minor or not, any student coming to the U.S. from a foreign country will face challenges.

“Anytime they’re coming from another country, there are cultural as well as language differences that have a huge impact,” assistant principal John Taylor said.

MCPS Superintendent of Schools Joshua Starr endorsed unaccompanied Central American minors’ enrolling under certain conditions in a July memorandum to the Montgomery County Board of Education.

According to the memorandum, students such as the unaccompanied Central American minors “are referred to the SCRIA residency specialist if the parents live apart from the child, in compliance with MCPS Regulation JEA-RB: Enrollment of Students.”

SCRIA then reviews enrollment requests for those students who are living with a guardian appointed by the courts.  That guardian must be a legal Montgomery County resident.

“Students may be enrolled, provided the guardianship was obtained for necessary reasons concerning the child, and not for the convenience of the persons involved or for the primary purpose of attending school in Montgomery County,” the memorandum reads.

But some Hispanic CHS students do believe that Hispanic students, who may or may not be unaccompanied Central American minors, are sometimes stigmatized.

“I feel that some Hispanics are stereotyped as gang members when in reality we are only here to learn,” senior Daniel Espinoza said.  “I hear some kids in the hallway referring to people as the ‘ratchet Hispanics.’”

Foreign students in general face multiple challenges when acclimating to CHS, not only socially but also educationally.

“The system I was coming from and the one here are very different to say the least,” said senior Angad Kalsi, who was born in the United Kingdom.  “So converting grades and getting used to the system was a hassle at first.  But I caught onto it soon enough and I’m now quite a fan of the way things are done.  You’re given quite a lot of choice on choosing classes but the requirements also mean you leave school pretty well rounded.”