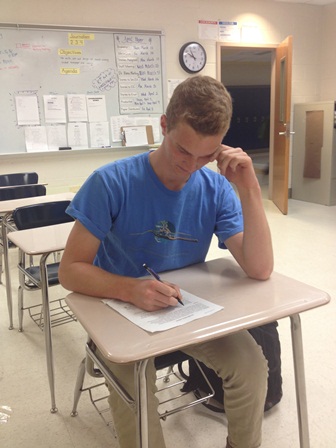 By Jordan Janis and Katherine Michael

CHS students, along with students in 17 other states, DC and the Virgin Islands, took an experimental Partnership for Assessment of Readiness for College and Careers (PARCC) test between March 24 and April 11 to measure the validity and reliability of this new assessment and to measure students’ real-world skills.

The PARCC assessment, which will replace the Maryland State Assessment (MSA) and High School Assessment (HSA) in the 2014-2015 school year, is a computerized test intended to measure whether students are on track for a successful college and career future. The Maryland education curriculum has changed to the new rigorous Common Core State Standards (CCSS), which the PARCC assessment is further aligned with.

The goal of CCSS, launched in 2009 by the National Governor’s Association and Council of Chief State School Officers (CCSSO), is to educationally prepare students of all areas for successful futures by setting more difficult mathematics and English literacy standards across the states.

According to ccsso.org, states have “raised the bar” by adopting college- and career-ready standards, which challenge students to develop deeper understandings, think critically and apply their knowledge to the real world.

Race to the Top, President Barack Obama’s program to increase state educational standards, data, and teacher and low-performing school support, provides grants to states with plans to address these issues.  Though states are not required to pass CCSS in order to receive federal Race to the Top money, they must institute a more rigorous curriculum in order to receive the money.  Maryland was among the first of the 45 states and DC to adopt the CCSS, with a unanimous vote from the State Board in June 2010.  The College and Career Readiness Standards (CCRS), Maryland’s own version of the CCSS, was implemented in the 2013-2014 school year.

“Maryland adopted more rigorous standards because many of our high school graduates were not adequately prepared for post-secondary study and careers,” Jenkins said.  “Many of our students were required to take developmental courses offered by two- and four-year institutions of higher education before they could enter into credit-bearing courses.”

The PARCC test provides more of an insight into student preparedness for college and the work world with its innovative and thought-provoking questions, as opposed to the multiple choice questions that involve little thinking.

“You’ve been taught for your entire school careers that answers can be found in ‘a, b, c or d,’ and industry says the kind of skills being tested is not actually what we need when we’re looking for people to work in our organizations,” said MCPS Superintendent Joshua Starr in a Feb. 24 press conference with student journalists.  “We want creative problem solvers, people who are curious, people who are smart but also can add to a team and work well with others.”

Although students are now being taught according to the PARCC curriculum, they will still take the MSA and HSA this year, for the PARCC assessment will not be ready until next school year.

“According to federal legislation, every state must assess students in grades three through eight and once in high school in both English and mathematics,” Jenkins said.  “The PARCC assessments are being field-tested this spring.”

According to Starr, randomly sampled students across the country will take PARCC to “test out the items” and see if the test is a “valid and reliable measure.”

CHS juniors in randomly selected English classes have taken these experimental tests with the mindset that they are mandatory; however, many students are against these random tests since they have had to miss classes.

Junior Aaron Nadler was in the class chosen to take the test, but he attended his normal class at that time instead because he had too many important tests and quizzes that he felt he couldn’t miss.

“I felt they chose the wrong time and group to take the test,” Aaron said.  “Junior year is very stressful, and having us miss class twice right before the quarter is about to end is very unintelligent.”

According to his mother, Gayle Nadler, the PARCC test is important because of the useful information it can provide, but she was disappointed that students were forced to miss another day-and-a-half of school after already missing so many with the snow, so she requested that her son attend regular classes instead.

“Teachers are moving classes ahead at a fast pace to keep up with the curriculum and make up for lost time because of the storms,” Gayle said.  “This is stressful in and of itself.  Topping that off with the additional stress of having to make up class work at this point in my son’s junior year is not in his best interest.”

Although administration responded acceptingly to his mother’s email request that he not take the test, other parents received different responses saying that the students must take the test.  Administration feels that though the timing is not ideal, these tests are beneficial and will measure students’ success more effectively than those in place now.

“I know we do a lot of testing, but once the PARCC test is online and replaces the HAS, I think it’s actually going to be a better test,” assistant principal John Taylor said.  “It will be able to show us more about what the students know.  Students will be able to demonstrate their understanding of common core and how they can really conceptually think about things and analyze things in a way that they can’t when the HSA is just multiple choice.”