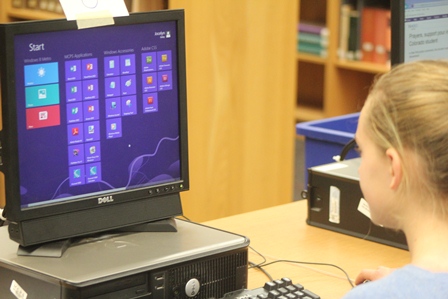 Ten Media Center computers were recently updated to Windows 8, and though they are still in development, the new systems are proving hard to manage on both the administrative and student ends.

“The user interface is challenging to use in this environment because [Windows 8] is not designed for a desktop computer,” CHS Information Technology Systems specialist Robert Jones said. “It is designed to work on mobile devices which doesn’t translate well to the way schools use computers.”

According to Jones, the school system eventually has to update the systems to stay on top of technology, so this update was part of the cycle.

The updated systems were put in a public place so that students could get used to managing them. However, students have had much trouble figuring out the new system.

“It was kind of annoying because I didn’t know how to use it,” senior Jeremy Ding said.

According to Ding, the main problem was figuring out the menu. Several of the icons look completely different.

According to Jones, this will be especially challenging for elementary students in MCPS who cannot read and rely on the icons to navigate.

“It took a really long time to figure everything out because nobody knows what to do,” sophomore Meredith Srour said.

Though students such as Srour and Ding find the new system confusing and time consuming, all the computers could be updated in the future.

“The primary difference is moving from a 32-bit to a 64-bit operating system,” Jones said. “That’s an enormous amount of memory and really important.”

As a result, MCPS may decide to update the computers the summer.

“We don’t have a choice, but it wouldn’t be surprising or unexpected if they are updated because it is already in use in some places,” Jones said.