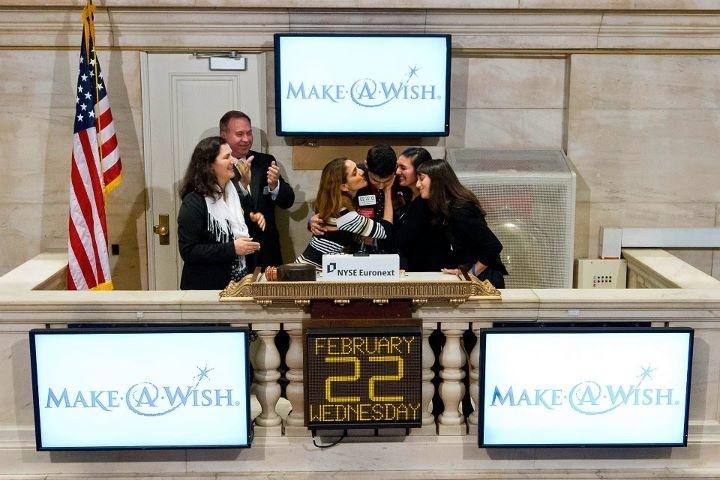 Students are rallying to support senior Nachu Bhatnagar, who recently relapsed after being diagnosed with Ewings Sarcoma.

Nachu traveled to New York, courtesy of the Make-A-Wish Foundation, to spend time at the New York Stock Exchange. After spending time on the floor of the stock exchange and making several trades, Nachu rang the closing bell with his family by his side. The event was broadcasted on international television so family and friends could watch.

“My favorite part of the trip was ringing the bell,” Nachu said. “I got the biggest standing ovation in 15 years.”

Nachu was able to ring the bell on the birthday of his father, who died last year.

While on the floor, Nachu expressed interest in attending a taping of The Daily Show with Jon Stewart and was subsequently introduced to Stewart’s brother, who works at the stock exchange and gave Nachu and his family VIP tickets to the show.

“Everyone was so awesome, and I am so glad to have had the chance to have done everything,” Nachu said. “It was probably one of the best times of my life.”

Ringing the bell at the stock exchange wasn’t the only unique experience Nachu has had lately. The next book in his favorite series, The War That Came Early, isn’t due out until July, but with the help of friend Coltan Jang, Nachu was able to get an advanced copy of the book.

“It’s no secret that Nachu has had some terrible, terrible luck,” Jang said. “The world is a pretty unjust place when you think about things like this happening to one person, so I figured that I’d try to balance it out a bit.”

Jang decided to use the website Reddit to try to get the book for Nachu, and he posted a letter explaining the situation and asking for help in getting an advanced copy. An editor got in touch with Jang and mailed him an advanced copy. Although the ending was not complete, author Harry Turtledove called Nachu to discuss it.

“He was in shock, but he recovered pretty well for his phone call with Turtledove,” Jang said. “It was one of the best feelings in the world.”

Nachu’s friends also came together to make sure he had an unforgettable 18th birthday.

“They set up a paintball field outside of our house,” Gauri said. “They blew up balloons and set up cardboard targets. It made him very happy.”

Senior Colin Asbury also gave him the birthday present of a phone call with Jonathon Goldsmith, the actor who plays the most interesting man in the world in the Dos Equis beer commercials.

“I felt really pleased that I could get him something that he would be proud and happy of having been able to do,” Asbury said. “I don’t know how much material things mean to a person who has terminal illness. I thought an experience like the one I gave him would be better.”

“Not only was it great becoming friends with the other guys, it was a great feeling being back as part of the CHS community, even though I’m fighting cancer at what seems at times to be all alone,” Nachu said.

Even though Nachu has had some incredible experiences, according to his sister, sophomore Radha, the fact that his friends visit him often is just as important.

“It’s not only the big stuff that his friends do,” Radha said. “Everybody stepped up to the plate and visited him all the time and lifted up his spirits.”

Despite the challenges Nachu faces, he is grateful for these experiences.

“It’s nice that out of all these bad things, good things can come out of it,” Nachu said.