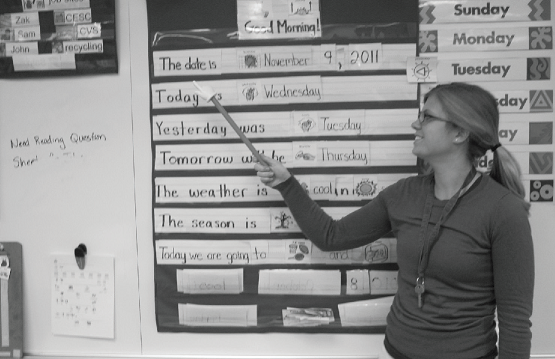 Parents of children in the Autism Program asked the PTSA Oct. 18 to buy a Promethean board for their classroom. The PTSA, who does not have the funds to pay for a board, has since formed a committee in order to help them obtain one.

CHS has two Autism classrooms, neither of which has a Promethean board. However, when many of the students attended Extended School Year (ESY) at Earle B. Wood Middle School over the summer, they had access to a board, which was extremely beneficial to them.

“The teachers commented on how the students paid so much attention and how their behavior was better when they were interacting with the boards,” said Elaine Potosky, who has two sons in the Autism Program.

According to Autism Program teacher Jenell King, the students benefited from the added visuals and the ability to move things around and make things bigger and smaller. The boards also allow them to communicate easier.

“They’re very motivated by technology and they interact better with technology,” King said. “They might say things through a Promethean board that they might not say other ways.”

Mona Zeiberg, who also has a son in the Autism Program, testified at a Special Education Advisory Committee (SEAC) meeting Oct. 27, requesting the Autism Program be granted the same equipment as other students.

“We don’t have the same supplies, and this isn’t equal,” Zeiberg said. “Our kids are part of the CHS community. Our kids should get the same thing as everyone else at CHS.”

According to Information Technology specialist Robert Jones, when the boards were originally installed, they were placed where they would help the most students.

“The goal was to put them in 60 percent of the classrooms,” Jones said. “When we put them in there were only five or six kids in the Autism Program, so it wouldn’t have helped that many people.”

“If it’s based on numbers, we will never get it,” Potosky said. “We feel like we’re never part of anything. A lot of parents don’t realize that our kids are here until they’re 21, or that we’re separate from Bridge.”

According to Principal Joan Benz, when the boards were originally distributed, not every classroom received one, but teachers without a board can share with others.

In order to have access all day, Benz suggests that students in the Autism Program move to a classroom where a board is available and added that security staff or administrators are available to help with the transition.

However, according to Potosky, the students cannot move classrooms.

“Some have trouble transitioning from one activity to another within the classroom, let alone switching rooms,” Potosky said.

There are also certain supplies in the Autism Program rooms that might not necessarily be able to be moved. For example, students earn rewards for different things, and these rewards may only be in the classroom.

“We can handle behavioral problems in the classroom,” King said. “They have a routine, and they like things the way they are.”

For now, parents are exploring different ways to obtain a board. After Zeiberg’s Oct. 27 testimony, the parents were invited to a Nov. 15 SEAC meeting where Superintendent Joshua Starr will be present. In addition, the PTSA is exploring whether any boards in the county are not in use and could be transferred to CHS.

“We’d like this to be solved during this semester,” Zeiberg said. “I hope they’ll give us the boards, and we don’t have to continue to fight.”

While both Potosky and Zeiberg are grateful for the support of the PTSA and the sympathetic response of the SEAC, they agree that if the issue is not worked out, they will have to become more vocal.