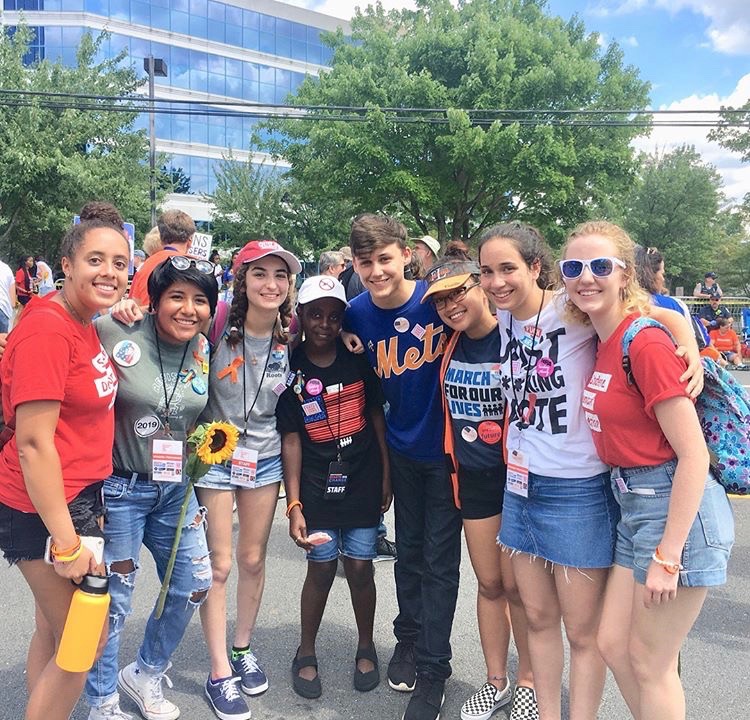 This is Dani and other members of Moco4Change at a protest of the NRA at the NRA headquarters. The new potential protest law will limit student activists’ ability to show their opinions

A proposal introduced in Aug. suggested that the National Park Service (NPS) should require protestors to reimburse the agency for the support and security it provides during demonstrations. In addition, other proposals would limit the amount of people that can protest and the areas they are allowed to protest in.

More than 40,000 people sent feedback to the NPS regarding recent protests recently. The agency will review the input of citizens as well as organizations, such as the Partnership for Civil Justice Fund and the American Civil Liberties Union, which are opposed to the suggested changes to protest rights.

“I think these changes would hurt student activists immensely,” senior and student activist Dani Miller said. “Fighting for our lives and standing up for what we believe in is an American right, not a luxury for those who can afford it.”

Miller was recently featured on the cover of Time Magazine for her activism regarding gun control. Miller started Moco4change, an organization dedicated to rally and inspire MCPS students to stand up for what they believe in and influence public policy through organized demonstrations.

For Miller and other student activists, a NPS change could potentially limit the amount of protests that they are able to attend. Many Americans are also worried that this potential law regarding required funding could limit activism and, in turn, limit citizens’ free speech.

According to an Oct. 15 Washington Post article, thousands of comments posted online oppose the potential changes, with some citing them as “‘unconstitutional.’”

According to Miller, movements of the past that have inspired great change in America, such as the Gay Rights movement and the Civil Rights movement, were more about ideas than funding; if protests are more restricted, it will limit the ability for ordinary Americans to fight for their beliefs to inspire change.

“Real grassroots movements aren’t backed by thousands of dollars: all they have is people who dedicate themselves to their cause,” Miller said. “Protesting is protected under the first amendment as a freedom. Taking away our voice will take away our freedom.”

“The NPS can do a lot to ensure the safety of people,” Miller said. “To be honest, the system set up right now seems to be working. At least in D.C., there are rarely any, if any at all, riots. D.C. is where people go to speak to the highest form of government, and they can’t do that if they have to pay a fee or the sidewalk is shut down.”

“The cultural and historic integrity of [certain areas in D.C.] involve the protests,” Miller said. “It is the March on Washington, protests against the Vietnam War and some of the biggest demonstrations in our history. In the words of John Lewis, ‘sometimes you need to create good trouble.’”