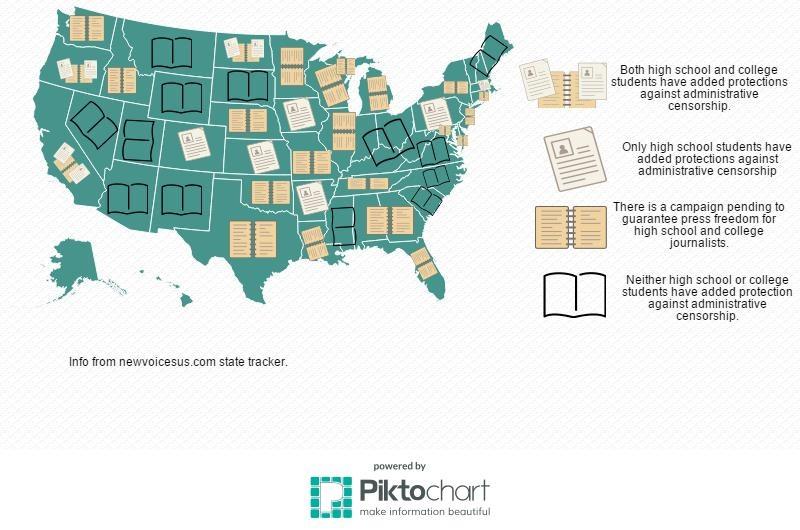 The New Voices Act is intended to increase student journalists’ freedom of speech and was introduced to 20 states last year. Many of these states, including Maryland, were inspired by North Dakota’s first passage of the act.

The Supreme Court decision in Hazelwood School District v. Kuhlmeier in 1988 limited freedom of speech for high school journalism students by giving administrators the right to censor school publications. The guidelines were vague and therefore allowed the censorship of practically anything the administrators disapproved of.

Since this decision, legislators have responded by passing and writing laws to provide all students with more freedom. Last year, the John Wall New Voices Act, an act that increases freedom of speech for student journalists, unanimously passed through the state legislature in North Dakota. Following this, people in 20 states came forward to work on New Voices laws across the country.

“This unanimous passage gained a lot of attention and really jump started the movement across the nation,” said Maryland-D.C. Scholastic Press Association President Gary Clites. “Similar New Voices Acts have been introduced in four states including Maryland. The New Voices Maryland Act is largely based on that North Dakota Bill.”

The New Voices Act of Maryland has officially been introduced for passage as Senate Bill 764. The Senate Education Health and Environmental Affairs Committee will hear testimony for the bill on March 2.

After the North Dakota bill passed, Clites felt that attitudes had changed and reached out to Senator Jamin Raskin about the possibility of a bill for Maryland. He also contacted the Student Press Law Center (SPLC) Executive Director Frank LoMonte who has contributed greatly to the Maryland New Voices bill.

“Several legislators have expressed interest in being sponsors, and now it’s just a matter of deciding who wants to sign on and file the bill,” LoMonte said. “We feel confident that a bill will be filed in the 2016 legislative session, and it could be voted on as soon as this spring, in time to become law for the next school year.”

The act not only aims to increase students’ freedom and protect journalism teachers from retribution for their student’s actions, but it also aims to help establish when censorship is appropriate.

Providing guidelines for what can and cannot be appropriately censored is also beneficial to administrators as well as students and advisers.

“A New Voices law lays out limited reasons that a public school or college could censor speech in school-affiliated media,” LoMonte said. “The journalism that is getting censored today that won’t be censored if New Voices becomes the law is journalism that exposes unflattering truths about a school or journalism that takes on sensitive social or political issues. Schools would be forbidden from censoring or punishing student journalists just for reasons of PR image control, which is by far the most common reason that students report being censored today.”

According to Clites, by teaching children from the time they begin school that they have a right to express themselves, the school system can demonstrate to the public, especially the younger population, how to utilize their freedom of speech.

“If we want to teach students that America guarantees freedom of speech and of the press, they must see that modeled in the schools they grow up in,” Clites said. “This bill is a step toward teaching our high school students that their rights under the Constitution are real and are an important part of citizenship in the USA.”

Maryland citizens who feel compelled to support the bill can contact their legislators to let it be known. Log onto http://mgaleg.maryland.gov/ to find legislators.