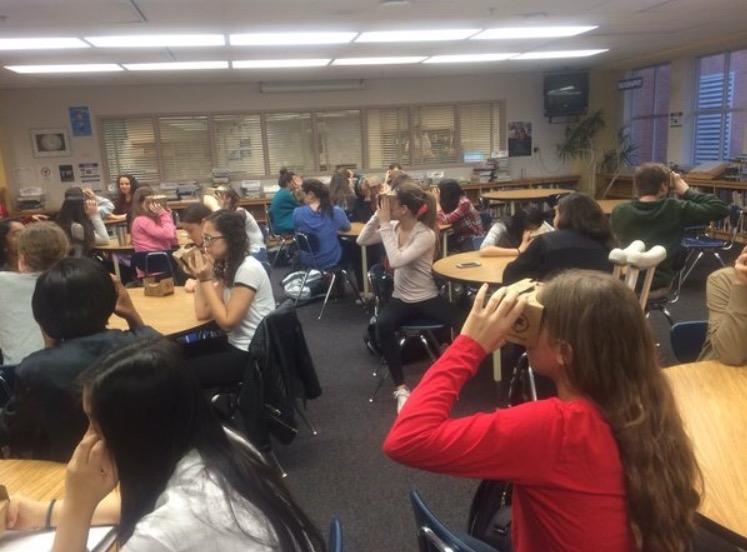 Students in the media center use Google Cardboard to travel to virtual destinations.

Now with Google Expeditions, students can see the Great Wall of China as if they really are in China, in an alternate, 3-dimensional world.

According to Staff Development Teacher and Signature Program Coordinator Deanna Svreck, a team of four people from the Google Expeditions team brought sets of virtual reality viewers and provided them to classes in each class period other than period four. Classes were selected based on teachers’ willingness to participate, but there were also “non-floating assignments” for the devices in Rooms 146 and 132 and in the Media Center.

“Using a cardboard box and smart phones, students can view a 3D image that the teacher projects to the phone,” Svreck said. “The teacher has a tablet with apps that will do the projection.”

According to techcrunch.com, a tech news website, Google announced its ‘Expeditions’ program earlier this year. Since early October, the company has been taking Expeditions on the road and to schools in the U.S., Australia, the United Kingdom and Brazil as part of its “Expeditions Pioneer Program”. Google bring tool kits to give the teacher everything they need to run a virtual field trip in class. The company plans to bring its program to thousands of schools across the country.

“It was a little disorienting sometimes,” Senior Rosmarie Fettig said. “It gave me motion sickness, which was actually pretty cool since I wasn’t even truly in motion.”

According to Senior Renee Wolf, she ran into some friends in the hallway trying it out, and she joined them.

“There was a room with puppies jumping on my feet, and it made me really happy,” Wolf said. “For kids that don’t have the money to go exploring or for places that are really hard to reach, it’s cool because you can go anywhere without even leaving your house.”

According to Fettig, the virtual reality field trip related directly to what the students had been learning in class. Her AP Art History class did tours of Versailles in Paris , the Parthenon in Greece and the Colosseum in Rome.

“It’s a whole new level of exploration and it’s way more immersive and interactive,” Fettig said. “It’s makes it much easier to connect with the material.”