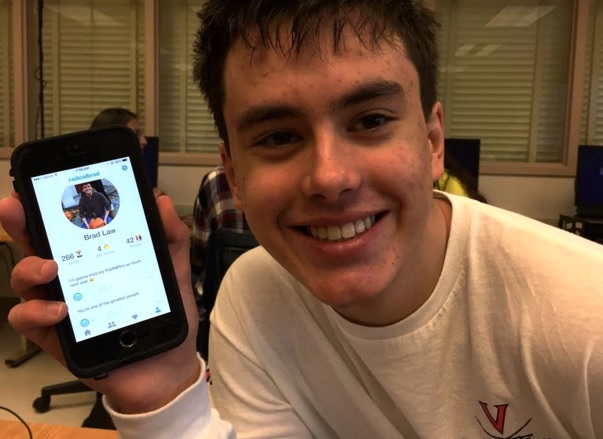 Senior Bradley Lawrence shows some of his Brighten compliments.

Making someone’s day just got so much easier.

These past few days, the mobile app “Brighten” has been appearing more and more on the home screens of CHS students’ phones.

This social app, created in 2013, is based solely on spreading positivity. The idea behind it is that once adding your friends on the app, you can exchange anonymous “brightens,” or compliments on each other’s walls. Users then have the ability to “like” and comment on the posts.

According to the official Brighten website, CEO and founder Austin Kevitch created the app after his friend passed away in a rock climbing accident. He saw how many people posted nice messages on his Facebook wall, and took this concept to pen and paper. He sat outside of his campus house with a “compliment box” for people to drop anonymous compliments in about their friends.

Its popularity soon gave birth to the idea of the app.

“At first I thought it wouldn’t really be anything special, but I was convinced by a friend to download it,” senior Angelo San Pablo said. “I’ve been so happy so see all the positive and funny compliments my friends send to me and others. I also enjoy the fact that Brighten allows senders to be anonymous because it isn’t as nerve-wracking to send them a compliment, and it makes the app much more fun.”

Anonymous posting does make it easier for cyberbullying, however.

“It really makes me so happy to see everyone being nice to each other, and what people have said to me makes me smile so much,” senior Bradley Lawrence said. “Some people are being a little mean and even though they’re joking it makes me sad, because that’s not what the app is about.”

Although anonymity can be a segue to cyberbullying, it’s a great start to have such a medium as the Brighten app to spread positivity online.

“I love the app,” senior Alexandra Conway said. “It’s really comforting to read people’s anonymous comments about you, and know that different aspects of you are appreciated–people compliment on all sorts of things. I’ve seen everything from physique compliments to work ethic compliments, and they all make the user feel amazing. It’s also super fun to give compliments anonymously, because you’re not worried about seeming creepy or ungenuine.”