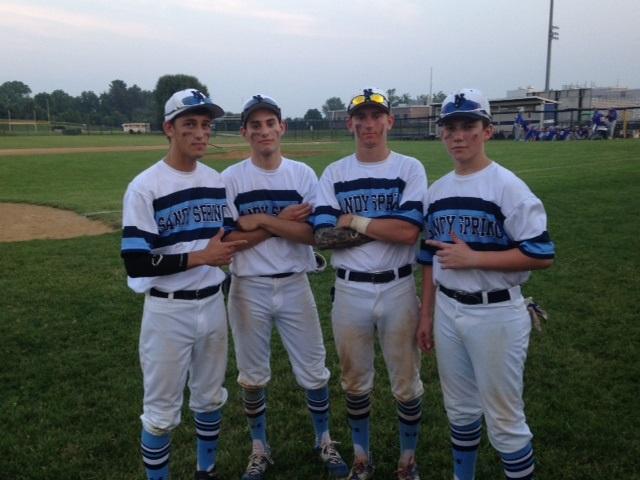 CHS baseball players participated in a summer league team without the help of their Churchill head coach.

“Championships are won in the offseason” is the classic sports mantra MCPS has decided to completely ignore, and even go so far as to work against.

According to the MCPS website, it is against county policy for teams to compete, practice or even meet with their coaches beyond the designated season, and violation of this rule will result in sanctions against the players and coaches.

This restriction prevents any school-organized off-season skill development and prohibits student-athletes and coaches from developing chemistry in the offseason.

It is understandable that allowing teams to remain exclusive and compete year-round would reduce chances of having equal tryouts. However, there is no reason why open practices or drills are just as taboo.

There is no downside to allowing coaches to hold open practices and drills for any student who simply wants to improve and meet the prospective coaches?

There is no reason for the harshness of the policy. The policy is a detriment to new players and inhibits the coaches’ ability to put together the best team possible.

In a perfect tryout, a coach will take the best players and put together the best team possible. Unfortunately, in high school sports, the tryout process is exceedingly rushed and is often conducted in less than ideal conditions, where the coaches have no prior knowledge of new kids. In this flawed system, mistakes are bound to happen and fluke tryouts can lead to wrong selections.

According to an anonymous source, who asked that his name not be used, during his freshman year he felt he was cut from his sport because he was not provided an adequate opportunity to showcase his skills due to an indoor tryout. The following year however, he made JV and was a consistent starter.

Though it is indeterminable whether this student deserved to be cut his freshman year, if it weren’t for the MCPS policy, the coaches would be allowed to watch him play prior to the tryout, and the coaches’ decision would have been far easier to support.

Not only would the tryout process become easier for both coaches and players, but every practice during the season would benefit if the students had time to play together with the coaches before the tryout date.

Obviously an open off-season drill session would not have the same impact as a structured team practice, but one of the most difficult aspects of putting a team together is getting players to work well with each other and the coaches.

According to senior field hockey captain Nina Kothari, if the team could come together in the off-season under the coaches’ supervision, the team would be “stronger” even if the off-season time was not exclusive to returning players.

The grounds for this policy are extremely unclear. The point of it seems to be a measure put in place to prevent coaches from making it impossible to make the team after it is put together.

However, preventing both new and old players from working with coaches in the off-season does not level the playing field. The policy only hinders the development of athletes, and deprives new athletes the chance to get to know their coaches.

Due to this policy, several CHS teams have found other ways to work together in order to get offseason work in.

According to senior varsity lacrosse player Sam Beloff, the varsity and JV lacrosse teams both have fall teams made entirely of returning players, but the teams are coached by a third-party coach to avoid rule violations.

This is proof of the policy working against its own purpose. The point of the policy is to prevent teams from staying established year-round. However, because these students do not have open practices they can attend under their own coach, they end up joining an exclusive club team that provide them with the exclusive practice and play opportunities that a year-round team would

According to Beloff, if they had the option, the coaches would definitely be willing to work with players in the offseason.

The policy should not be abolished all together, as it comes from a good place. But, if coaches are willing and able to hold non-exclusive, optional opportunities to work with students who want to make their team, the county should not stand in their way.