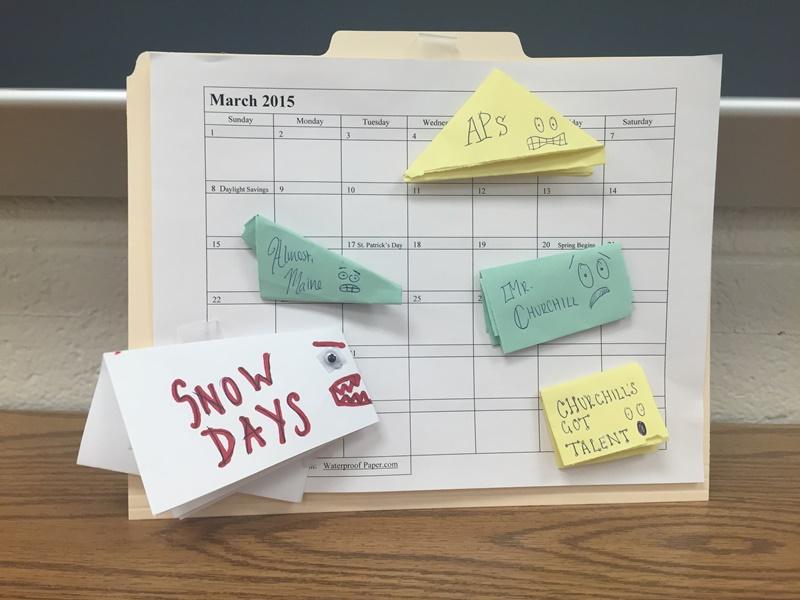 A staggering seven snow days this winter have affected CHS students both inside and outside of the classroom, from standardized test preparation to extracurricular activities being cancelled.

With the state requirement of 180 school days per year, the county has decided as of March 20 to stick with its original contingency plan by extending the school year three days to June 17.

“Our plan, at this time, is to follow the plan as outlined in the contingency calendar,” MCPS senior communications specialist Gboyinde Onijala said.  “We currently are not exploring any other options beyond adding the days to the end of the school year.”

While adding days to the end of the school year allows students to make up the three extra snow days that surpassed the four days built into the MCPS calendar, it does not fix many of the negative effects the snow days had on academics and community activities.  For example, additional instructional days at the end of the school year do not make up for the time lost preparing students for AP and HSA exams, which have inflexible dates.

“If you teach APs, you’re bound by the test and the day of the test doesn’t change,” AP World History and AP Psychology teacher Christopher Forney said.  “The valuable time is lost.”

To make up for the seven lost instructional days, AP teachers are prioritizing the most important information for the tests and assigning homework for material that they cannot cover in class.

According to Forney, the World History team has had to cut many activities and teach certain topics less thoroughly.

The impact of snow days is not only being felt by history teachers but among other CHS departments as well, including the science department.

“There’s a bit of cramming to do, and students are going to need to do more work at home on their own because they don’t have in-class time,” AP Biology teacher John Ernst said.  “I will be giving extra assignments to make up for that time.”

Many students, however, feel prepared for these standardized tests because of the capability of CHS teachers.

According to senior Cece Wallerstedt, the fast-approaching AP exams combined with the amount of work students have missed have brought about more student stress, but her teachers “have done a good job prioritizing information and assigning work to do at home to make sure all the material is covered.”

Not only have the snow days increased students’ workloads and challenged preparation for standardized tests, but they have also caused cancellations of numerous extracurricular activities.  The CHS winter play Almost, Maine cancelled its opening night Feb. 21 and closing matinee March 1 due to inclement weather.

According to director and drama teacher Rachel Gates, a snow day and a cancellation of after-school activities caused two missed rehearsals, so she cancelled the opening night due to concerns about the preparedness of the show and more inclement weather for the weekend.

“The actors were up to speed and the tech crew had built things, but they only just started working on the lights, so I had huge concerns about what it would look like if we put it on with just two scheduled days before the opening night,” Gates said.

While Gates chose to cancel the opening night, she was forced to cancel the final matinee because an ice storm caused the closure of school buildings during the time of the play.  The play could not be rescheduled because the auditorium is booked months in advance for Blast rehearsals.

According to Almost, Maine stage manager senior Jackie Spang, while the cancellation of the show was unfortunate, the two successful shows that ran “allowed many people to come out and see it.”

The fate of Almost, Maine may be considered lucky compared to how SGA’s Churchill’s Got Talent fared.  After being rescheduled twice because of snow days, the SGA had to completely cancel one of its biggest money-making events.

“We couldn’t put the show on because the contestants would not have had enough time for rehearsals,” said SGA secretary and senior Rachel Rabinovitz.  “The problem is that the auditorium is only available on certain days, so we can’t reschedule the show again.”

The cancellation of Churchill’s Got Talent upset the students participating, who were looking forward to showcasing their talents.

“It was disappointing,” said senior Annie Fang, who was going to sing while senior Billie Sun played the piano.  “Churchill’s Got Talent is one night where we can support our friends and just appreciate the sheer amount of talent in our school beyond what we may see on a regular basis.   Everyone, especially the seniors who won’t get another chance next year, had something truly special to bring to the table.”

According to Rabinovitz, the SGA is disappointed that Churchill’s Got Talent will not run this year and is trying to figure out a way for the contestants to still perform in order to display their talents.

Despite the loss of Churchill’s Got Talent, the SGA will still present its male pageant, Mr. Churchill, though this event was also rescheduled to April 1 due to snow.

According to Rabinovitz, the change of date of Mr. Churchill did not cause as much extra stress as Churchill’s Got Talent did, though rehearsals will now be more difficult to schedule around spring sports.

While the county’s plan to add extra days in June does not offset these challenges to academics and other activities, some feel that it is the only way to make up for the lost days.

“I don’t see much sense in extending the school year by only two or three days, but I understand it to try to help get everything in that is needed by the students so that they can be successful the following year,” Ernst said.  “Extending the year is probably the best way to get extra days in, and I would rather have them do that than cut spring break short or remove some other holidays.”