Starr looks to future as county continues to grow 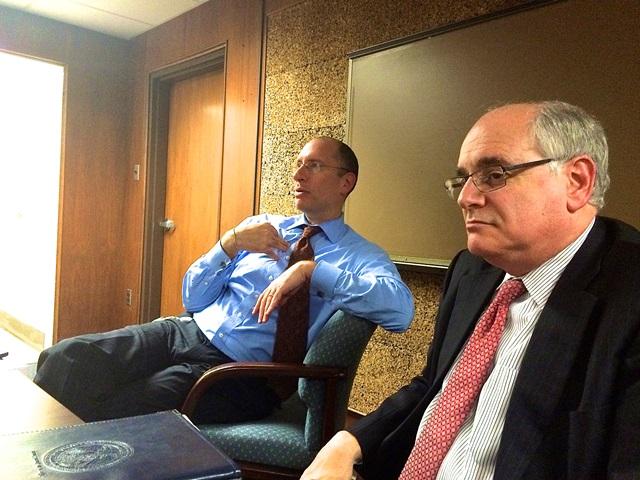 By Pablo Roa and Gil Jacobson

From an increased dependency on technology to a student population that is growing by thousands each year, in the three years since Joshua Starr became Superintendent of MCPS, he and the rest of MCPS leadership have adapted quickly to the ever-evolving conditions of the largest school system in Maryland.

One major issue that has plagued MCPS in the last few years is the overcrowding of schools and the fact that some facilities in the county have not been renovated in decades. Starr believes that these are some of the most pressing issues facing the county and for this reason he is recommending that $220.8 million be added to MCPS’s current six-year school construction plan to help the county address its space needs.

“Montgomery County continues to make significant investments in meeting the space and facility needs of MCPS and we are very appreciative of their commitment,” Starr said in an Oct. 28 press statement. “But enrollment in our school district is increasing every year and if we are going to keep up with that growth, an even bigger investment is going to be needed. It is our hope the state will step up this year and provide additional revenue to its largest and fastest-growing school district.”

While building new schools and modernizing old ones is something that every school system does, the situation has become especially dire in MCPS, where the student population is booming.

In the coming years, the Superintendent hopes to increase academic standards throughout the county while managing pressing issues such as the growing number of ESOL students and the issues that currently face the ESOL program, along with the implementation of new standardized testing procedures.

“We put $1.4 million in this year’s budget to focus on ESOL,” Starr said at an Oct. 29 media roundtable with MCPS student journalists. “I think that the issue we have with ESOL is that schools do it in different ways. We’re not as consistent as we need to be.”

With the additional money, Starr hopes to ensure that each school has a head ESOL teacher to help lead the school’s ESOL program. Starr says that improving ESOL programs throughout MCPS is just one of many steps the county has taken to help adjust to its growing special education needs.

“There has been an increase in students with special needs in the last 15 years,” Starr said. “Every teacher now knows that they not only have to be a content teacher, but they also need to know something about special education. We’re working hard on it, but it comes down to money.”

The continued growth of the student body and the lack of monetary resources to build new schools forces the county to use relocatable classrooms, known as portables, in order to accommodate students without drastically increasing class sizes.

Starr hopes that an increase in construction funding will help reduce the need for portables as the county’s construction efforts in recent years have already led to a significant drop in the number of portables being used by MCPS.

Montgomery County Board of Education (BOE) president Philip Kauffman says that MCPS currently uses 404 portables – a significant drop from the 700 portables the county used in 2007.

At the roundtable, Starr and Kauffman stressed that while progress has been made to alleviate the pressures of the growing student population in MCPS, the county needs help from the state if it hopes to continue to grow in the coming years.

“We are advocating strongly for some support from the state to help us with our construction because we need help,” Starr said. “The county has done an enormous amount, but we just can’t keep up. We’re bursting at the seams.”

Several CHS students have cited technological advancements as an additional reason to modernize schools.  Of CHS’ two feeder middle schools, Cabin John’s modernization was completed in 2011 while Hoover’s finished in 2013.

“I think [modernizing Cabin John] was something that needed to happen given the new and improved technologies that came with the new school,” senior Rucha Pandit said.  “Also, I think that the school did not want to wait to renovate it until it was in dire need.  They probably wanted another school that would last longer than the one before.”

Along with building and modernizing schools, another method the county uses to control the growing student enrollment rate is redrawing the boundaries that determine what schools students must attend. Through redistricting, the county is able to add students to schools that have vacancies and reduce the number of students at schools that are overcrowded.

While redistricting may temporarily help control the student population, Starr suggests that it should not be done frequently as it is disruptive to school communities.

“We will always look at boundary studies as well as building new schools,” Starr said. “But the issue with redistricting is that, when you do it, you want to try to ensure at least a 10-year stability so you don’t have to move people again. You don’t want to be too disruptive.”

While the fate of Starr’s school construction plan rests in the hands of the state, MCPS has made significant progress in modernizing the technology inside the existing school buildings. The county is in the process of distributing Google Chromebooks to all schools – the first step in a major district-wide effort to increase the use of technology in classrooms and to combine all school-related technology into one Google platform.

“We wanted to start moving the technology conversation beyond just wireless infrastructure and Prometheans,” Starr said. “We want kids to have devices and to be using them to access lots of different materials.”

Starr says that many devices were considered to lead the county’s technology initiative but Chromebooks were ultimately the best fit. Other devices, such as iPads, would not work for MCPS’s broad technology needs because iPads “don’t play well” with other devices that the county uses.

“Chromebooks were decided on for multiple reasons,” Starr said. “The Google apps for education are really solid; it’s a really good platform. A Chromebook is also an inexpensive device.”

Using Chromebooks and the apps that go with them is part of a major technology overhaul that the county has experienced in recent years. Along with Chromebooks, MCPS has now added Wifi to schools throughout the county and, despite some problems with its implementation, has helped bring the school system to the forefront of technology use in education.

“We accelerated the implementation of the wireless networks two years ago, and whenever you’re making a huge technology push, there are going to be glitches,” Starr said.  “Nothing’s going to be perfect right out of the box.”

Another major academic change that MCPS plans to make in the near future is transitioning from the Maryland High School Assessments (HSA) to the Partnership for Assessment of College and Careers (PARCC) assessments as end-of-course exams used to fulfill high school graduation requirements.

Although the Maryland State Department of Education plans to make PARCC assessments standard throughout the state, Kauffman and Starr believe that it is not appropriate to fully implement the new assessment at this time because there is still no way of knowing if it is a better measure of college readiness than other, previously-tested exams.

Starr said that after months of contact with state officials, Kauffman was able to convince the state Board of Education to delay the implementation of PARCC as a high stakes exam for a couple of years – a decision that Starr believes will benefit students in the long run.

A major academic problem that has plagued MCPS in recent years is the county-wide trend of students underperforming on county math assessments.

Starr said that there are many factors that are responsible for this trend, such as students being pushed too far too fast by “skipping” math levels and students ignoring the county exam review guides. Starr also said that a big reason why many students fail county math exams is that they know that they do not need to do well on the exam to pass the class depending on their quarter grades, so they do not put in the effort to do well on the test.

Regardless of why students are not doing well on county math exams, Starr acknowledges that it is an issue that the county must and will address, and that any effort to help improve student performance on those exams must start with the teachers.

“We’ve taken a really hard look at this issue,” Starr said. “Math is a tough one. Some of our teachers are absolutely fabulous at helping all kids achieve at a high standard, and some of our teachers aren’t as good at that, and we’re working hard with them. There’s no one answer when it comes to math, but we are working very, very hard at it, and we have to take a hard look at the exam grades, because we know that they’re going to change. We’ve put together a plan to address it.”

“I found that mathematics is a framework for a way of thinking that’s different from any other subject,” senior Anand Upender said.  “Math is all about problem solving and therefore, a decrease in math scores has a larger impact on our students than just the inability to do math alone.”

While Upender acknowledges that problems persist in MCPS, he is optimistic that Starr and other MCPS leaders will be able to solve these problems in the near future and help the county continue to grow.

“I think as a county we have the resources to help our students,” Upender said. “Our students seem to be highly motivated, but the county has to find ways to fix the kinks in our education – and I’m confident that they will.”