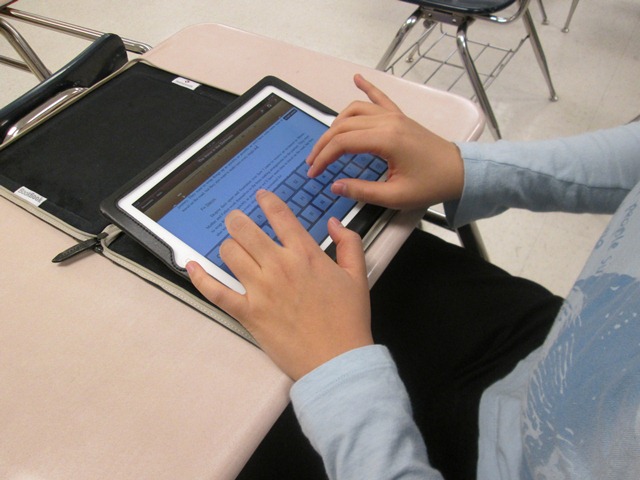 Students across Montgomery County will finally have free access to a wireless connection on any personal device in schools beginning in the 2013-2014 school year, thanks to an MCPS Board of Education vote this past September. This type of technology will offer a wider digital curriculum and enhance teaching and learning for students.

“We are working with schools to explore the effective use of mobile and tablet technologies as part of the instructional program,” MCPS Chief Technology Officer Sherwin Collette said. “These learning environments allow teachers to use digital curriculum to empower students to be collaborative, critically thoughtful learners.”

“I think students will be carrying around a lot more devices because they will be more useful to them,” IT Systems Specialist Robert Jones said. “It’s kind of pointless to carry them around now.”

All Montgomery County Public Schools are required to abide by the Children’s Internet Protection Act (CIPA) to ensure safety and protection for students.

According to Jones, the same websites that are blocked on school computers will still be blocked on personal devices.

“The number one thing people notice that’s blocked is social networking,” Jones said. “We still have requirements by state to protect children as a whole. That’s why you can’t go on Facebook or other inappropriate websites. The state also requires that they have an idea of where students are going on the Internet.”

According to Jones, the school’s Internet service could stop if it is flooded by too many users at one time. Although it is not certain yet how this problem will be solved, student IDs may be involved.

According to Principal Joan Benz, giving students the opportunity to use the Internet in school will primarily help with confirming information for research.

Media specialist Paige Pagley said she and other media specialists around the county are also trying to figure out a way to provide more electronic books for students to access on their own personal devices. This system will hopefully be available for the upcoming school year.

“We would download them to a mobile platform and they would eventually expire after a pre-determined amount of time, much like our book check-out today,” Pagley said. “Books that are a part of our database purchases will be available 24/7, but the ones that are specifically for electronic downloads will only be available to one person at a time.”

Much like many college students are already doing now, more CHS students may be roaming the halls in the near future carrying virtual textbooks on devices such as tablets or Kindles

“This transformation in content is accelerating a shift from printed textbooks to interactive, digital curriculum and instructional materials,” Collette said. “As our curriculum transitions to a digital medium and the next generation of state assessments move to an online administration, the demand for greater access to technology directly in our classrooms is becoming more urgent.”

“A lot of times, virtual textbooks have extra programs we can use to enhance our learning,” Firer said. “We don’t get that in a normal textbook.”

Sophomore Carly Kabelac, on the other hand, does not see how this implementation benefits CHS students.

“I don’t like the idea,” Kabelac said. “It’s really hard to focus on only textbooks when there are other distractions online, and the screens are bright and annoying to look at.”

MCPS may not see some of these more rapid changes so soon, however.

“Just getting it installed was a monumental achievement,” Jones said. “It probably won’t have much of an impact at all initially, but as we move along, we’ll see.”