Achievement gap subject of Starr’s ‘State of the Schools’ 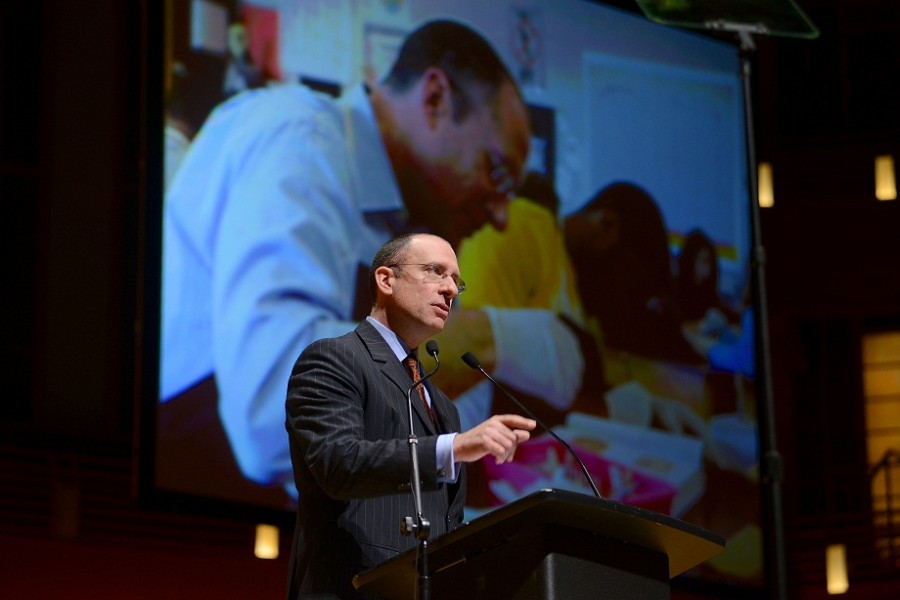 Superintendent Joshua Starr gave a “State of the Schools” address Nov. 12 to update the community on MCPS’ progress.

The theme of this inaugural address was “Building the Future Together.” The slogan was intended to encourage the community and schools to work together to improve education for MCPS students.

“This is an excellent opportunity to showcase MCPS as the best district in the country,” Starr said.

Starr attributes this success to the rigor of the curriculum and high academic performance. Still, he believes that some of the testing and initiatives brought forth by the No Child Left Behind Act (2001) are not realistic and must be discontinued.

“A strong academic program is the bedrock of our system,” Starr said. “However, one learns to solve problems by solving problems, not by being tested on the theories of problem solving.”

Elected MCR Treasurer and CHS senior Stephen Lee agrees that students should not have to be tested on theories and approaches, but rather practical ideas that can be applied to the real world.

“Schools also need to teach students about current real world skills,” Lee said. “It is easy to memorize notes, but it is hard to apply those notes into the real world. Also, Dr. Starr is correct in saying that teachers and parents have to find out what motivates students. If a student does not like what he or she is learning, or thinks that it is not needed for their choice of career, then the student is more likely to do poorly in that class.”

According to Starr, it is imperative for

the community to teach students to be “innovative thinkers, good communicators and creative problem solvers.”

Starr also believes it is important for students to work with people “from diverse perspectives” so that they will be able “to apply academic skills to real problems.”

Starr and the MCPS Board of Education are relying on outside support to achieve their goals.

“All of our students have hopes and dreams for the future,” Starr said. “We must have a community that continues to be deeply involved in the schools.”

According to Starr, MCPS will be working with individual partners to “be a model for learning in action.”

Lee agrees that the community should be involved in the education of the county’s children. He suggests that schools offer help in job preparation and community leaders offer internships and other real-world work experiences.

“I have seen many times that students in MCPS do not know how to create a resume or write a cover letter,” Lee said. “From personal experience, both are crucial in finding a job or internship. Churchill and the community also need to help students get real world experience.”

Despite being one of the best large school districts in the country, however, Starr acknowledged a wide gap in the dropout rates between African Americans and Hispanics and Asians and whites.

“We must recognize that an African American or Hispanic ninth grader is three or four times more likely to drop out before graduation than a white or Asian student,” Starr said. “And while our dropout rate has been decreasing over the years, that gap hasn’t narrowed. That must change.”

Additionally, according to a Nov.12 NBCWashington.com article, MCPS is at a critical point in which the system must be aware of a changing student population.

Most of our students are people of color and may be the child of an immigrant, or an immigrant themselves,” Starr said. “All of our students have hopes and dreams for the future, but many may not have the social capital to make those dreams a reality. So it is up to us—working together—to provide the supports and services that enable their success in life.”

According to Lee, he is

surprised that Dr. Starr did not discuss the budget because “MCPS needs to be fiscally responsible.”

According to Brianna Burke, SGA President and senior MCR Representative, she believes that MCPS and CHS have already provided a great environment for students to learn and prepare for the next stages in life.

Currently I believe Churchill and the surrounding community already does a great job of preparing students, as students are encouraged to become extremely well rounded,” Burke said. “Churchill ensures a balance between challenging academia and excellent extracurricular activities, which are both equally important in preparing students for their futures.”