Athlete of the Month: Rebecca Ewel 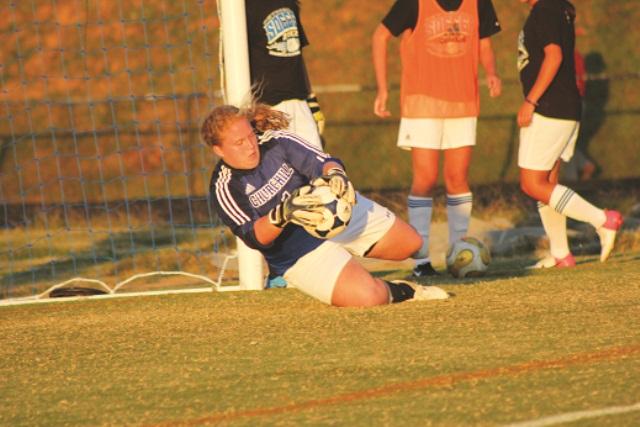 By Stacy Stein and Matt Raab

Dripping with mud, senior captain Rebecca Ewel emerges from the pitch. Any trace of the original color of her uniform is gone. Skinned knees. Nosebleed after being kicked in the face. And in 24 hours she’ll do it all again.

The birth of this soccer keeper’s career began in the third grade, when Rebecca took her turn at goalie like every other reluctant recreational soccer player in the United States. She willingly dove to the ground to make a save, and from that point forward she was branded keeper.

Along with her twin sister Sara, Rebecca made the jump to a travel team in fifth grade.

“When we’re on  the field together it’s more we’re teammates than sisters,” Sara said. “Even though she can get on my nerves I know that it’s because she cares.”

“She was a very good goalie when she first came to my team,” Hakopian said.  “She has developed into one of the best goalies in the state.”

Since making the varsity team as a sophomore, Rebecca has made significant strides to establish herself as a dominant keeper on a team that has made regional finals three years in a row. Her goalkeeping in her role as starting keeper anchored the team throughout last year’s successful campaign and the start of this year’s.

“She has developed into a great leader,” Hakopian said. “She’s done a really good job with a very young team. You need senior leadership and she definitely brings it.”

According to Hakopian, Rebecca has taken a particular interest in helping the younger players adjust to the team, especially junior goalie Tania Mamdouhi, who is playing at the varsity level for the first time this year.

On and off the field Ewel has displayed the qualities of a team leader through the unique personality required to be a goalkeeper, a position that requires resilience, assertiveness and raw ability.

“You have to be a type of person to be a goalie,” Ewel said. “A lot of people think you have to be legitimately crazy to put yourself in situations where people are kicking high speed balls at your face, but the excitement exceeds the worry for me.”

Rebecca has also spread her love of soccer to others. In order to receive her Gold Award for Girl Scouts, the highest award a Girl Scout can receive, she set up a soccer clinic last spring.

“I designed a soccer clinic for underprivileged kids,” Rebecca said.  “It costs so much to get good soccer training. Twice a week we would work on basic skills like passing and dribbling. I know how much I enjoy soccer, so I want them to experience the joy I got out of it.”

Besides Girl Scouts, Rebecca has also earned her black belt in Taekwondo, which she believes has helped her in goal.

“Taekwondo taught me how to be mentally focused,” Rebecca said. “It taught me discipline and core values for life.”

With school practice and practice for Rebecca’s region one team, SAC United, she spends a great deal of time playing soccer, but her love for the game and her teammates allows her to excel.

“She’s a very dedicated soccer player,” said Cynthia Ewel, Rebecca’s mom. “She particularly likes the camaraderie of the girls on the team. Her best friends tend to be soccer players.”