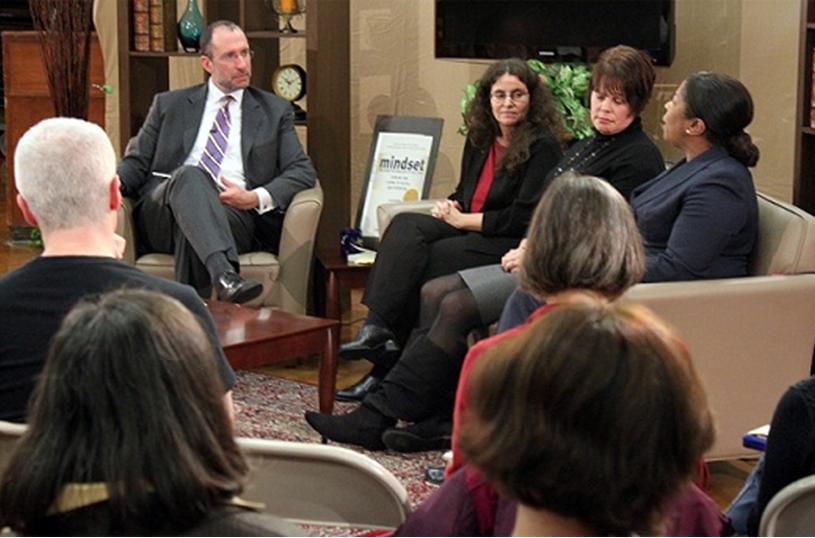 By Josh Denicoff and Lara Fu

“I’ve been doing book clubs as a way to introduce some new ideas,” Starr said. “After doing the first two meetings on broader issues, I wanted to turn to education.”

Donna Redmond Jones, principal of Rosa Parks Middle School and former CHS assistant principal, has attended Starr’s book clubs throughout the year and believes they are a great way for MCPS educators to communicate.

“It’s important to me to read about the skills and attitudes that educators need to cultivate in 21st century learners,” Jones said. “I enjoy having an exchange of ideas with people who have a variety of perspectives.”

This month, Starr discussed Tony Wagner’s book The Global Achievement Gap: Why Even Our Best Schools Don’t Teach the New Survival Skills Our Children Need. In the book, Wagner covers the collaboration and communication skills he believes are most important in the real world, as well as the skills he believes are not useful.

“I don’t consider test-taking to be a useful skill,” Wagner said. “No employers hire or promote on the basis of a standardized test score.”

Because of this, Starr is choosing to deviate from former Superintendent Jerry Weast’s goals of pushing students to achieve higher standardized test scores. Instead, Starr wants to focus more on the relationship between teachers and students.

“When I talk to students about the teachers they like the most, they always say it’s the ones who cared about them,” Starr said. “What’s most important is that our kids are engaged and having fun, and they’re learning to love learning.”

“What happens between students and teachers in the classroom makes the difference,” Benz said. “When you have a great teacher, it really improves the ability to learn.”

In his book, Wagner’s seven survival skills which students need to learn to survive in the real world include critical thinking and problem-solving, collaboration across networks and effective oral and written communication.

Starr, however, understands that for certain classes that cumulate in a year-end exam, such as AP and IB classes, it is for teachers to incorporate survival skills without sacrificing test preparation.

“I really want to hear from our teachers and students about how they’re doing that,” Starr said.

Some AP teachers feel they are already incorporating these survival skills into their curriculum as well as preparing students for the AP.

“I think we already incorporate these skills into our class,” AP English teacher Kevin Brown said. “The only time we stray away from teaching these skills is when we have to prepare for the AP exams.”

“I would love it if kids came,” Starr said. “Kids, adults, whoever wants to come. They’re open to anybody.”