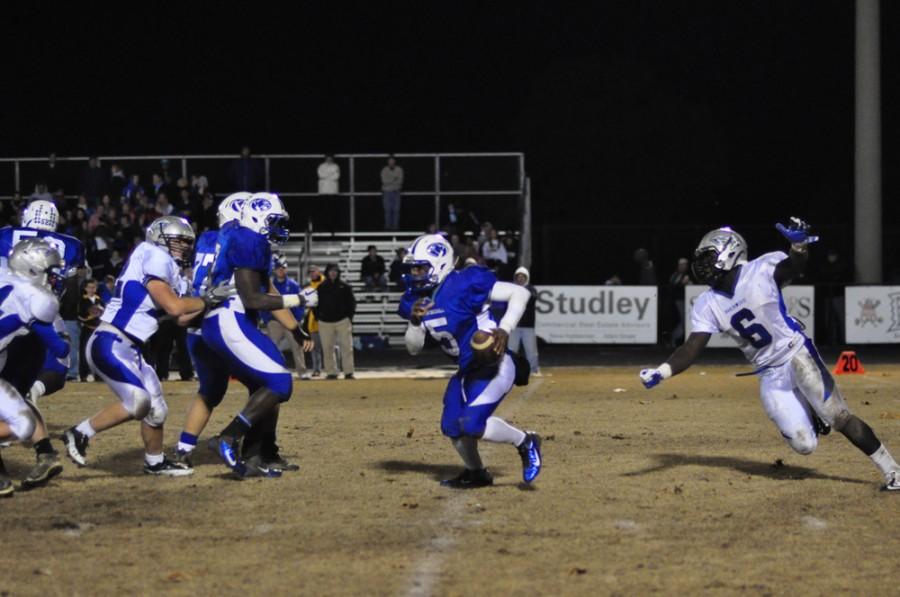 By By Joel Denicoff, Sports Editor

The CHS football team came out hungry in its first home playoff game since 2004 by defeating Gaithersburg 24-6 Nov. 11.

CHS controlled the tempo of the game from the start when senior quarterback Lansana Keita found junior Dominique Williams for a 21-yard touchdown in the Bulldogs first possession. The win improved the team’s win streak to seven as the team moves on the regional finals against number one seeded Quince Orchard.

“Going into the Gaithersburg game we all had the mindset that we cannot lose,” senior Aik Davis said. “Defensively we were more focused than we had ever been, which is how we stopped them.”

Davis led the team defensively with nine tackles, seven of them being solo tackles and an interception. The Bulldogs held the Trojans scoreless until mid-way through the fourth quarter and sacked their quarterback 11 times. Keita had a big game rushing 15 times for 92 yards and two touchdowns. He also completed seven out of 14 passes for 110 yards, including a touchdown.

“It was a solid win but now we have to practice harder than before so we can be ready for QO,” Davis said.

“The keys to defeating Sherwood were how we forced many turnovers,” senior captain Matthew Miller said. “We played our style football by running the ball, and we played solid defense.”

The team held Sherwood to only three field goals and held its last three opponents to under 15 points each game.

“The defense in the team is so dominant because we all love to hit,” senior Nadim Elhage said. “We know that when offense gives the ball up, it is just another opportunity for us to hit someone and stop the opponents.”

Though Elhage had a big game with six tackles and a sack, the offensive star of the game was senior running back Curtis Kamara who ran for 132 yards on 22 carries with a touchdown. The game was so important for Kamara because the 132 yards rushing helped him break a milestone as he ran for 1044 yards on the season.

“This was a huge milestone for Curtis,” Miller said. “He worked hard in every game and earned it. He is a great weapon for our offense.”

“On the bus ride over our guys were extremely quiet because they were so focused on winning,” head coach Joe Allen said. “It was definitely revenge from last year. We wanted this one so bad. “

With the win, CHS went undefeated in the Montgomery 4A South Division, and they even cracked the Washington Post Top 20 at number 20.

“We worked incredibly hard to get where we are but we aren’t finished,” Allen said. “We need to be fully prepared for the playoffs so we can make a run.”

The Bulldogs offense came mostly from running the ball as Keita ran for 116 yards on 18 carries, including a four-yard run for the Bulldogs’ first touchdown of the game. Kamara had an explosive offensive game, carrying the ball 12 times for 137 yards, including a 54-yard touchdown.

“Our team is definitely ready for playoffs,” Elhage said. “We know it is time for our team to show it is one of the most dominant in the state.”