WCHS varsity field hockey is as united as ever 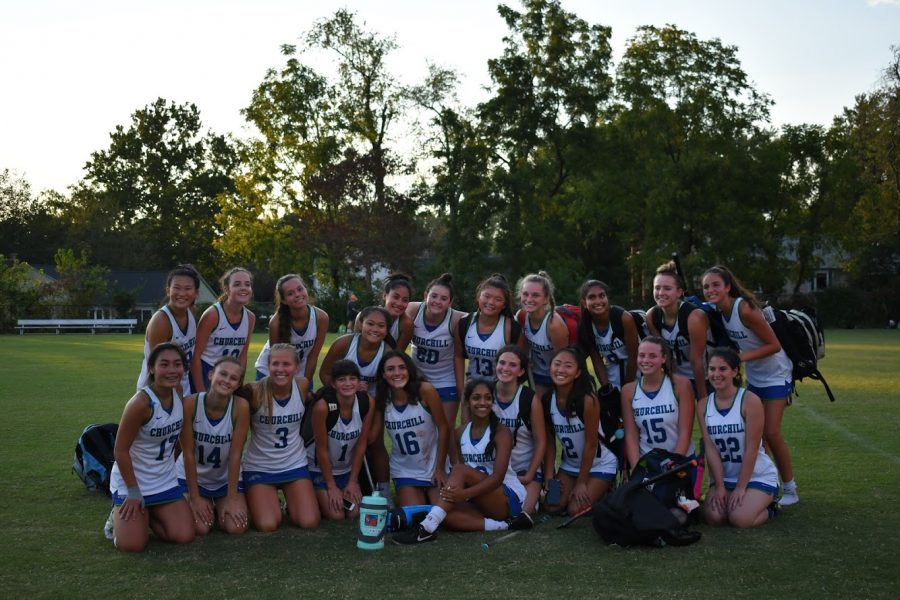 With their theme being UN1TY, the WCHS Varsity field hockey team, coached by Catherine Miller, has proven that a united team is a winning team. The theme is inspired by the idea that in order to be successful, it is important for a team to work as a whole rather than individual athletes.

This season, the WCHS field hockey team has been on a roll after gaining momentum game after game. Currently the team has remained undefeated, which they have accomplished through hard work and encouragement of one another. The players hope that this season they will be able to continue to work together and stay motivated throughout every game in order to be number one.

“Our team goals are to be united, communicate well, and play with high intensity the whole game,” junior Jordyn Reicin said.

One of the key ways the team has managed to stay undefeated this season is by keeping their eye on the prize, which they are able to do with the help of practicing every single day.

“Everyone puts in the work everyday at practice through the non-stop drills and early Saturday practices,” junior and captain Claire Kim said.

Each player on the team is valuable and contributes to the success of the team. Some of these athletes include Grace Jennings and Jordyn Reicin, who are leading scorers with five points, Lucia Alem and Natalie Heshmat, who control the center field and Cecilia Hu and Claire Kim, who are a part of the defensive line.

Another important aspect of the team’s success is their ability to form close bonds with one another on and off the field. While some athletes may view their teammates as someone they simply play a sport with, the WCHS field hockey team ensures that they bond with one another so that they have the best communication and group dynamics on the field.

“On the day of the game we dress up for a theme, meet with each other to exchange goodies, and then we have a team breakfast together to get us energized for the game,” Kim said. “If it is not a game day the team still tries to spend time together outside of practice.”

Even through challenges and tough opponents, the field hockey team has managed to stay focused in order to remain undefeated. For example, one of WCHS’s toughest opponents this season has been Urbana. Although the team knew that playing them would not be easy, the players did not give up and worked together the entire game in order to ensure a victory. The score was 2-1 with WCHS coming out on top.

“In our first game against Urbana, they scored first,” Miller said. “Some teams might have gotten discouraged at that point in the game, but that goal seemed to motivate us.”

Another memorable game was on Sept. 26 against Walter Johnson because the team came together and played as one unit.

“The game against WJ was one of the first games that the team truly was a well oiled machine,” Kim said. “It felt as if the team was able to read each other’s minds.”

The sense of togetherness and unity is something shared between the team and the coach as they hope to continue improving this season and finish off strong.

“We have a challenging schedule this season, and we have to do our best to stay focused on what’s important at this moment,” Miller said. “In the bigger picture, I think a lot of our success comes from holding each other accountable to live up to the standards we set for ourselves and taking time to talk about when we fall short.”