Athlete of the Month: Serena Xu 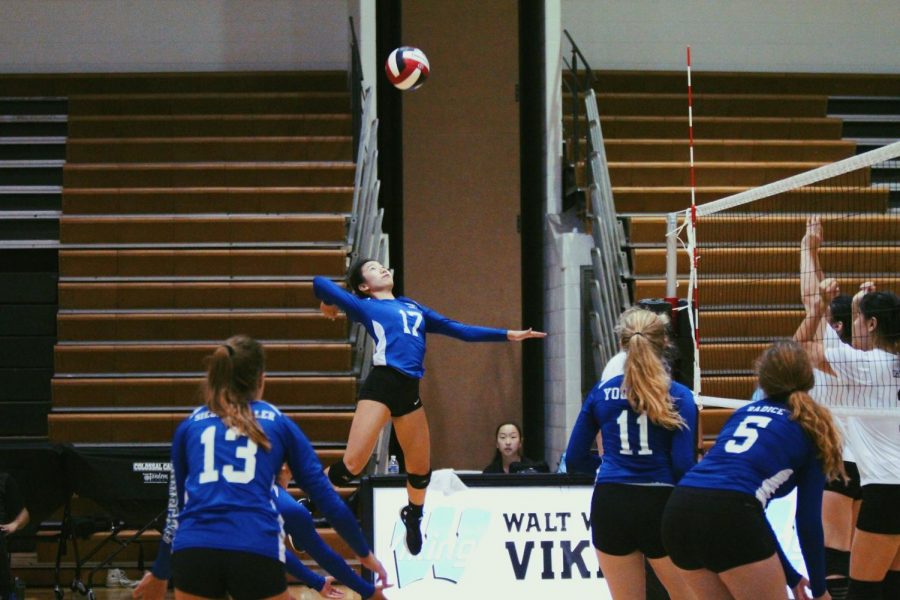 Senior Serena Xu soars high to hit an outside set. Xu is usually the one setting, but she is able to play almost any position due to her high skill level.

Six years ago, senior Serena Xu stepped on the court for the very first time. Today, she is a key player in helping the WCHS volleyball team win their games.

Before starting at WCHS, Xu played club volleyball and continued to do it throughout her high school career.

“I’ve played five years of club volleyball,” Xu said. “My team and I even went to the girls national championships two times.”

Xu has played many positions on the team, her main one being a setter. This means Xu normally takes the second ball, after a teammate passes it to her, and helps the hitters win points. However, this doesn’t come without stress.

“There are times when I get nervous while playing,” Xu said. “It normally happens when it’s a really close match. As a setter, I have to be able to decide who can win our team a point and set her.”

Other teammates appreciate her hard work and dedication to the team. As a captain since junior year, Xu motivates her teammates to help them play their best.

“Serena works effectively with the team as she creates a one on one bond with each girl,” junior Leila Motazadi said. “She turns the worst into good by influencing others to work hard and become better players.”

“There are balls and plays where you just feel like no one is going to get that and somehow she does,” junior Julia Taylor said. “She gets us out of a lot of problems with her serving and passing and setting. I guess the best part of playing with her is just knowing that anything’s possible and you have someone on your team who will never give up.”

Xu works hard and is committed to becoming a better player. Currently, Xu has a 24” vertical, but wants to get 26”, and plans on strengthening her legs to achieve her goal.

“Serena has always been a great player,” girls varsity volleyball coach Cindy Hillard said.  “Over the previous three years, she has gone from being a really good setter to being a great setter and great defenseman.”

As a freshman, Xu started on varsity and continued to play for varsity for the rest of high school. She developed many skills that made her better, on and off the court.

“I’ve definitely become stronger mentally,” Xu said. “It’s really difficult to keep calm and collected under pressure and volleyball has helped me with that.”

Every gameday, Xu and her teammates participate in spirit days to get everyone motivated, with themes such as hawaiian and hippie day.

“To me, encouraging every player on the team is really important,” Xu said. “Team sports are all about having fun together and lifting each other up.”

The team has won most of their games, their current standing being 8-1 in the regular season and 7-3 in tournaments. Xu plays a major role in helping her team win all their games by motivating them and always trying her best.

“When the chips are down, Serena wants to have the ball,” Hillard said.  “She wants to find a way to win, and nothing stops her.”