Athlete of the Month: AJ Woehrle 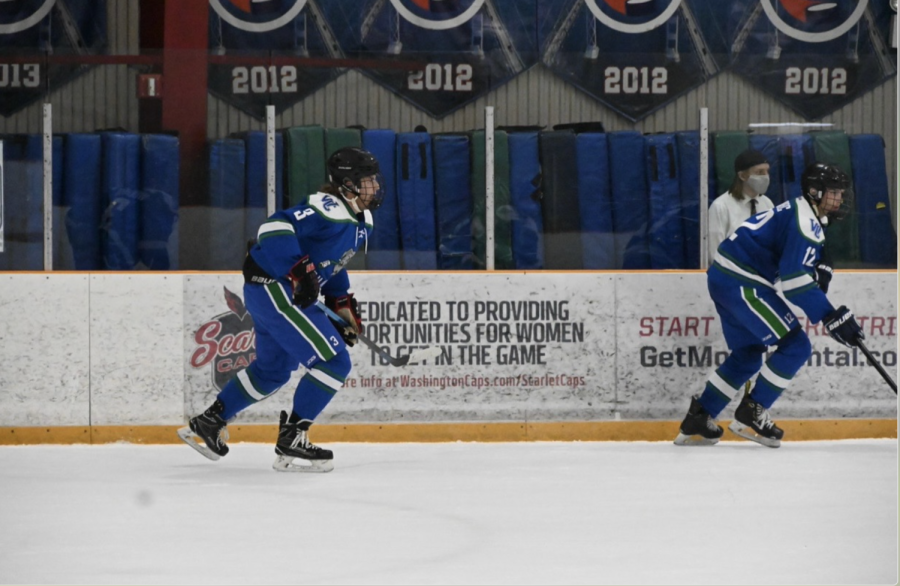 Senior, AJ Woehrle getting back on defense with his teamate. In hockey, team chemistry is the key to winning.

From crack of dawn practices to late night matchups versus Wootton at Cabin John Ice Rink, WCHS senior and captain of the Varsity Hockey team AJ Woehrle is always trying to improve his game and be prepared for his matchups every week.

“This year our team has been very solid,” Woehrle said. “I think having a good start is very key to producing an overall strong season.”

When it comes to drills, practices and gametime, Woehrle is a veteran. He has been playing since he was a little kid and has been on a rec or club team since middle school. As high school approached, Woehrle decided to transfer to St. John’s in order to fully focus on his hockey career. But, a shoulder injury limited him from getting up to his full potential.

“The first time I got injured was in the middle of freshman year when I suffered shoulder pain all season and had multiple shoulder strains,” Woehrle said. “This unfortunately ultimately led to a dislocation and a labrum surgery.”

As the idea of shoulder surgery became a reality, Woehrle began to question whether or not he should play the following season. Ultimately his decision was to continue to play and regain his previous potential. As senior year approached, Woehrle made the decision to come back to WCHS and play Varsity Hockey for one final season.

“I’ve come to the conclusion that injuries are just part of the sport,” Woehrle said. “Yeah, when the injury happened it really sucked, but I think I’m regaining my strength, and there’s nothing better than playing for my school with the team.”

The team has practices on Tuesdays and Thursdays at 5:30 a.m., leaving the entire roster exhausted and ready to get some sleep at night. Lots of the players have to adjust their sleep schedules just to get through the school day without falling asleep.

¨It’s so tiring,¨ WCHS sophomore and defender Matthew Kim said. ¨Sometimes it can be relaxing because it’s so early and nobody is up, but I truly do wish it was after school.¨

While it is sometimes difficult for some of the new players to adjust to the early practice times, Seniors like Woehrle adjust to the circumstances.

“I personally kind of like the early morning practices even though it makes me so tired during the day because I like bonding with my teammates and preparing for our next week’s game,” Woehrle said.

Woehrle and the other seniors have known each other for so long that the teammate chemistry is strong. It helps them play better and have a better connection on the rink.

“AJ is vital to our team because he gives us energy and a ton of skill,” WCHS senior and Varsity Hockey player Lex Bernstein said. “When he plays well, we play well.”

While playing a vital role for the team, Woehrle also motivates the underclassmen on the team to practice hard and play to their fullest potential.

¨It’s really awesome to play with AJ,” said Kim. ¨He is truly one of the great leaders on the team and he helps some of the underclassmen play their best.¨

Woerhle and the team’s performances have led to a very solid record of 5-1 to start the season out and the team continues to strive to play hard and turn them into wins. As the season progresses, it will be more and more important to have veterans on the team like Woehrle to help motivate and strengthen the team.

“I love playing for Churchill,” said Woehrle. “I’m just upset that it’s almost over already. That’s why we saved the best for last.”