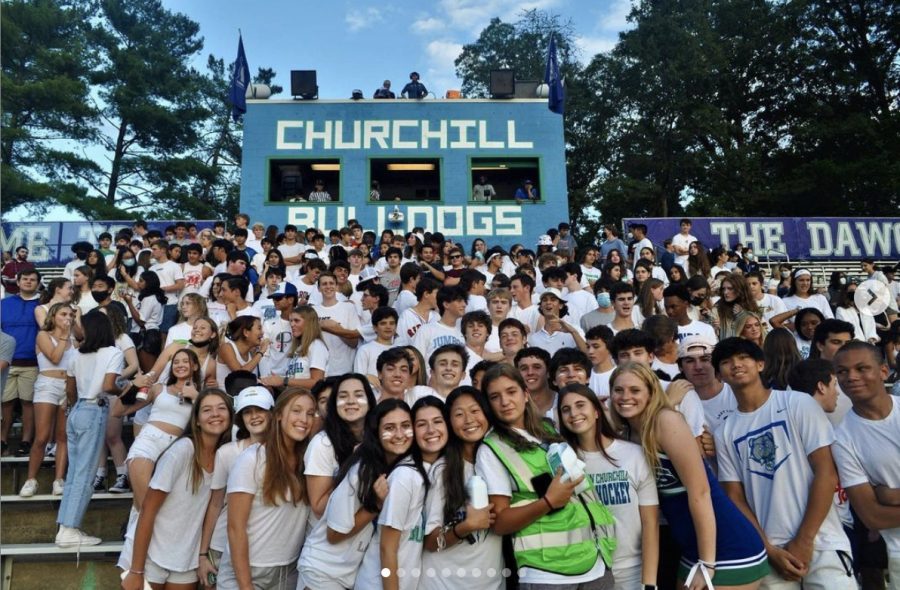 The student section wears all white and is excited for a big game against BBC. The Bulldogs would end up winning this game 7-0, winning their first home game of the season.

As the new school year begins, students at WCHS have begun to remember what makes high school great. Seeing friends everyday, going out for lunch, and real interactions with teachers are just a few reasons why in-school is better than online learning. But, there’s nothing better than cheering the bulldogs on with a sold out crowd on a beautiful Friday night.

While the boys varsity football team played six games last year in a condensed season, it was noted by the players that they missed the crowds.

“Last year was difficult,” Ryne Acheson, senior safety and wide receiver on the WCHS varsity team, said. “A lot of the time our team gets energy off of the fans on a big play, stop, or score, so not having them last year made it very difficult to adjust.”

Adjust no more! The varsity team started their season with a blue-out against WJ. Even though WCHS lost at the very end of the game, one could tell the energy from the crowd and the senior section was electric.

“I’ve been going to football games since freshman year and the game against WJ had the best crowd I’ve seen in a while,” Jake Schuman, a senior at WCHS, said.“After COVID, it’s awesome to be back at the games and have a good time with my friends.”

After a crazy first week, the team traveled to Blake on Sept. 10, where they got their first win of the season. Next up, a white-out versus BCC at home on the 17th where WCHS won 7-0. Once again the atmosphere was amazing especially due to the win.

“The crowd has been helping us significantly,” Acheson said. “When the senior section gets chants going during big plays it gets our team going and gives us some needed energy.”

The interest in the team also introduced the production of Instagram pages like @churchillk9 and @barstoolchurchill that have been hyping up the team, posting pictures of student school spirit and relaying game time information and what to wear to the games.

While the home games were fun and all and the crowd was the most electric it was in years, everyone was circling the date for the black-out game against our arch rivals, Wootton, on the road.

“All of us decided to go to the away game at Wootton because they are our biggest rivals and we wanted to cheer them on,” Schuman said.

The black-out did not disappoint.

This game was easily the craziest of the year so far. The student section was absolute chaos. Students were crowd surfing, holding posters and jumping around so much that the bleachers almost got torn apart.

“That was obviously the best crowd we’ve ever had at a road game,” Acheson said. “And it helped. We won 28-0 because of the raucous student section.”

The varsity team flat out embarrassed the Wootton team, shutting out the Patriots on their home turf. Jaden Selby threw for four touchdowns and led the team to a monstrous victory.

“It was a great game!” Schuman said. “The best one of the year by far!”

After the pandemic season last year, students this year have begun to embrace and appreciate all WCHS sports including lacrosse, soccer, football, cross country and others. Last year made all students agree to not take advantage of these games and time together.

“The fanbase is fantastic, and we want this to continue,”’ Acheson said. “Tell your friends and family to come to the games on Friday nights. The team benefits from it greatly because it ultimately makes the team play better. Also we use the money that we make from the games to improve our equipment, accessories, etc.”

The team will continue to battle through their schedule going against solid opponents like Richard Montgomery and Gaithersburg. Hopefully, WCHS keeps the astounding pace that they are on right now.

“Going to football games is one of the best parts about high school,” Schuman said. “You can’t miss it!”