Athlete of the Month: Sebby Breton 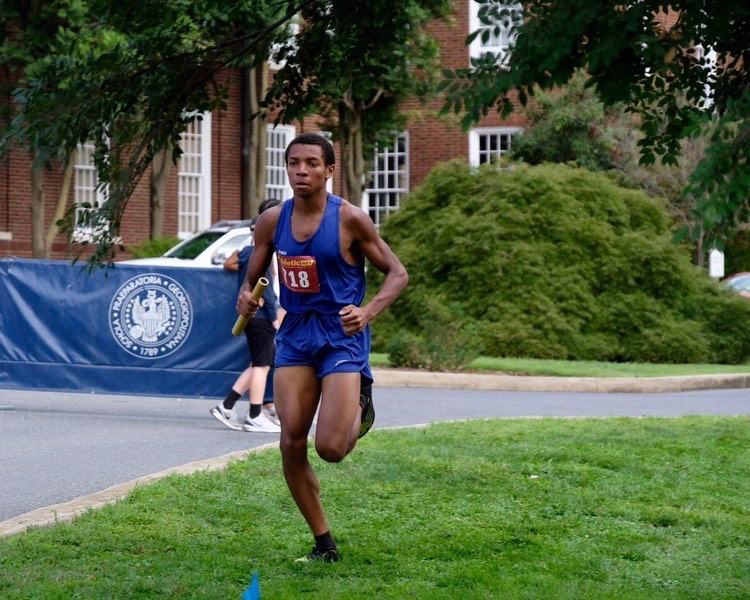 Senior Sebby Breton runs ahead of the pack at the Woodward Relays at Georgetown Prep on Sept. 4 2021. Breton first joined cross-country sophomore year and has become the number one runner on the team.

For two hours a day, six days a week, senior Sebastien Breton hits the pavement, one foot in front of the other. Breton is a valuable member of the WCHS cross-country team and has been running since seventh grade.

“I wanted to make more friends outside of school and get engaged and active in the outdoors,” Breton said. “I love setting goals for myself and achieving them one day without excuses.”

Breton joined the cross-country team sophomore year and was only able to run for one season before COVID-19 hit. During quarantine, he began increasing his mileage, building up to 40-50 miles per week, even hitting 65 miles once.

Breton also joined the Bullseye Running Club and participated in local races, such as the Burke Lake 5k where he placed first, a stark contrast to his placings pre-COVID.

“Sebby has improved just amazingly. As a sophomore, his biggest accomplishment was winning a JV Race, which put him somewhere around the 15th best runner on the team,” cross-country coach Paul Jacobson said. “Within a little over a year, he was within the top three, four guys, and now number one.”

Breton’s times are not the only ones that have seen improvement. Since the start of the season, many of his teammates have earned personal records with the help of Breton’s initiative and leadership.

“When I start off fast, [my teammates] stick with my pace, so I’m basically dragging the herd,” Breton said. “As I’m finishing hard during any runouts with the boys, it attracts them to finish hard too. That’s why the Coach wants us working together as a pack.”

Currently, Breton is leading the boys team and has placed first in all five divisional meets. He also ran his personal record of 16:37 in the 5k race on Sept. 21 against Richard Montgomery and Northwest High School. He hopes to run a low 16 minute or below that in the 5k before the end of the season and plans to continue following his training schedule to do so.

Breton enjoys motivating his teammates and giving them inspirational speeches before races to get them pumped and excited. His teammates admire him for his dedication and positive attitude.

“My favorite thing about Sebby is the energy he brings every day in and outside of school. He will start a conversation with anyone about anything,” junior Bradan Welby said. “He is always ready to hype anyone up no matter who they are or what team they are on. If I had a dollar for every fist bump Sebby gave me, I would be a rich man. Around Sebby you can’t help but be happy and give everything you got.”

Even in the face of adversity, Breton remains optimistic. During COVID-19, he suffered an IT band and foot injury, causing him to miss out on training and other physical activities. However, he returned stronger than ever and urges newer runners to take care of their bodies.

Though he has experienced setbacks, Breton continues to train hard to work his way up the Montgomery County Running Leaderboard. Currently, he holds the number five spot in the county, a spot Coach Jacobson believes Breton can hold for the rest of the season. Breton hopes to continue running at a collegiate level and looks to professional athletes as role models.

“What inspires me to keep going is watching athletes compete in the Olympics,” Breton said. “They inspire me to do more, live the best life, and go after what I’m really looking forward to, to capture my dreams in the future.”