NCAA basketball tournament gets called out for gender inequality 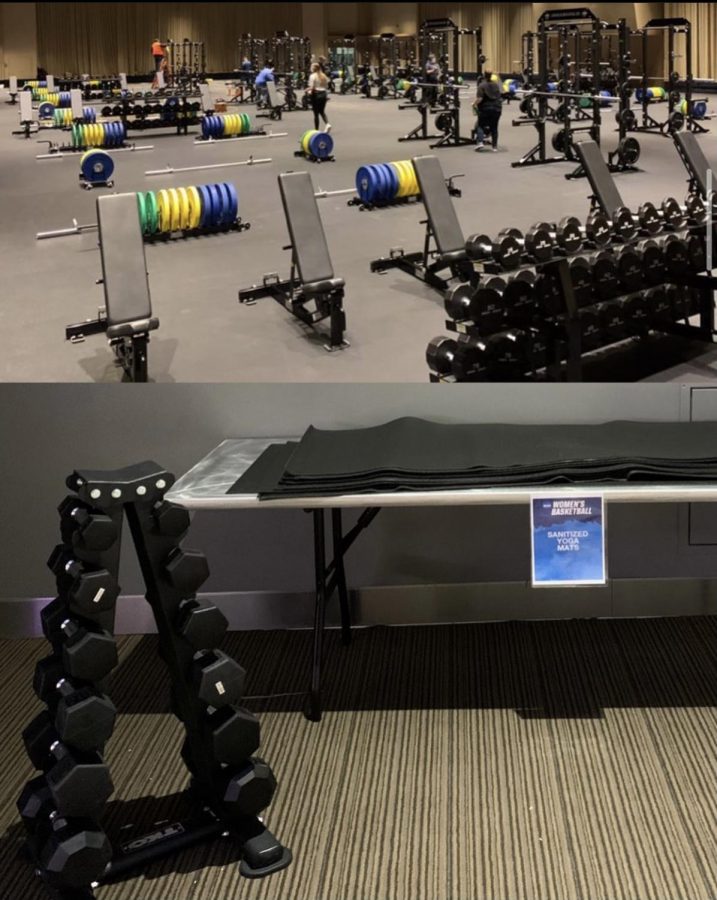 Ali Kershner, a sports performance coach at Stanford posted this photo on her Instagram highlighting the differences in the men's and women's weight room for the NCAA tournament.

One of the most anticipated sports events for college basketball players and fans around the country is the NCAA Basketball tournament. This year, more than ever, the National Collegiate Athletic Association or NCAA for short has been called out for blatant gender inequality in their basketball tournament.

The men’s teams are having their tournament and protective bubble in Indianapolis, Indiana while the women are playing in San Antonio, Texas. One of the main problematic differences between the men’s and women’s facilities was their weight rooms. Photos of each were posted on social media which immediately started an uproar.

Photos from players and coaches such as Ali Kershner, a coach at Stanford, were released on Twitter and Instagram showing the women’s weight room and the men’s weight room. The photo of the men’s room showed a huge room equipped with multiple benches, weights, and other equipment while the women’s room displayed a stack of dumbbells and yoga mats.

This outraged fans and the players. Female athletes have been fighting for equality and to be given the same opportunities as male athletes, but organizations such as the NCAA have been falling short of meeting their demands.

“We acknowledge that some of the amenities teams would typically have access to have not been as available inside the controlled environment. In part, this is due to the limited space and the original plan was to expand the workout area once additional space was available later in the tournament,” Holzman said.

Also on March 18, Sedona Prince, a forward for the University of Oregon women’s basketball team posted a video on Tik Tok showing the women’s weight versus the men’s and exposing the NCAA for saying the issue was not money but that there was not enough space. In the Tik Tok, she compared the two weight rooms as well as showing the women’s practice court, weight room, and a bunch of extra, unused space. The video got over 11 million views and created an even bigger uproar with people demanding change and equality.

Prince posted another Tik Tok video on March 20, showing their improved weight room that was provided by the tournament. This featured new equipment, more dumbbells, bands, squat racks, and colored lights on the walls. Prince and her teammates thank the NCAA for listening to them and providing them with new equipment. Although the women’s teams and bubble were given the equipment they deserved eventually, this change only happened after the NCAA received major backlash and was called out.

Other differences have been pointed out by players to the public such as the differences in food, merchandise, and advertising. The men’s teams were provided with buffets of food while the women were given meal plans with fewer options.

Their “swag bags” are dramatically different as well with the women only receiving a towel, two water bottles, a hat, a bag, and a few other products with generic phrases on them like “Women’s Basketball”. On the other hand, the men received substantially more items than the women did, all branded with slogans such as “March Madness” and “The Big Dance.”

While this is not the first time there have been obvious discrepancies between how men and women are treated in sports, and most likely will not be the last, female athletes continue to fight for themselves to be treated the same as male athletes at the professional and collegiate level.

“The gender bias in the NCAA tournament and in sports, in general, is incredibly clear and is something that female athletes are unfortunately not strangers to. It is not enough to be called out then change to fix it, organizations should work to make the opportunities and facilities equal from the beginning,” Max said.