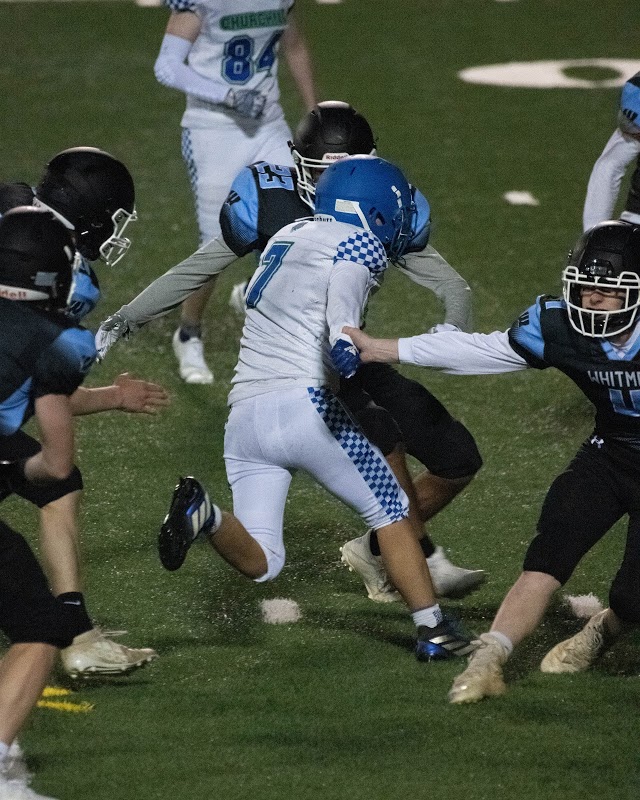 WCHS Senior Jeffrey Yee weaves between two Whitman defenders after catching a pass during the first game of the Bulldog's season.

For months the pristine WCHS football field lay untouched, as many saw their seasons canceled by COVID-19. However, in March, WCHS football made its triumphant return. The Bulldogs stormed back onto the field, ready to prepare for a unique season.

“We started official practice in March to prepare for our shortened season,” WCHS varsity football player Jeffrey Yee said. “It was a great feeling getting back on the field and seeing the rest of the team.”

Although things looked bleak at first, many held onto hope of a football season. Even though they were separated, a lot of individual players still prepared for a season they were not sure they would ever get.

“A lot of the guys on our team kept working out and practicing at home even though we were not sure if there was going to even be a season,” Yee said. “I stayed in shape during our long offseason and it definitely paid off.”

Although the condensed season is off to a terrific start, it doesn’t mean everything is back to normal. Because of the pandemic, the team has had to adapt in many ways, adhering to MCPS’ regulations. At every practice, the team has to stay in pods, limiting the contact between players. Even through the rigorous exercises, they wear their masks, determined to stay safe and keep the season alive.

“The pods were a bit strange because the team is so used to having huge practices together, but we are willing to do anything to play,” Yee said.

When MCPS announced that fall sports would be returning, the players on the football team were ecstatic.

“I could not believe we were getting our season, and our football group chat started blowing up,” Yee said. “Everyone was so excited and just happy to be back in business.”

The season is not the normal ten game regular season that WCHS is used to. This year, the season only consists of two games, and each opponent is an MCPS intra-conference opponent, as opposed to interstate games in years past.

“The short schedule was a little disappointing, but I completely understand it. Everyone is just super grateful to be back on the field,” Yee said.

Even with the odds stacked against them, the WCHS team has come back with a vengeance. In a scrimmage against BCCHS, the Bulldogs held their own. Yee forced a fumble, and the team scored several touchdowns in their first organized on-field competition.

The schedule intensified after, with their first official game on April 2 against WHS. The team made easy work of the Vikings, defeating them soundly with a final score of 44-7.

Every player on the team shined: the special teams had some excellent punts from senior Jason Wood, the offense boasted a three touchdown performance from senior wide receiver Josh Pilarski and the defense forced several turnovers with an interception from senior Richard Chechille.

The team’s final game of the season was on April 16, as they faced off against WJHS. The home game was a bittersweet one, as it was senior night for the Bulldogs, but they were also defeated 34-10.

“It’s going to be great, just having the chance to celebrate senior night with my parents watching in the crowd,” Yee said. “It sucks that our season is short but I know the guys are happy to get their moments and recognition.”

No matter the outcome of the final game, the Bulldogs rallied this season. Their performances have provided a little distraction from the pandemic, and just stepping on the field has already made their season a success.