The Women in Sports virtual panel empowHER women in MCPS 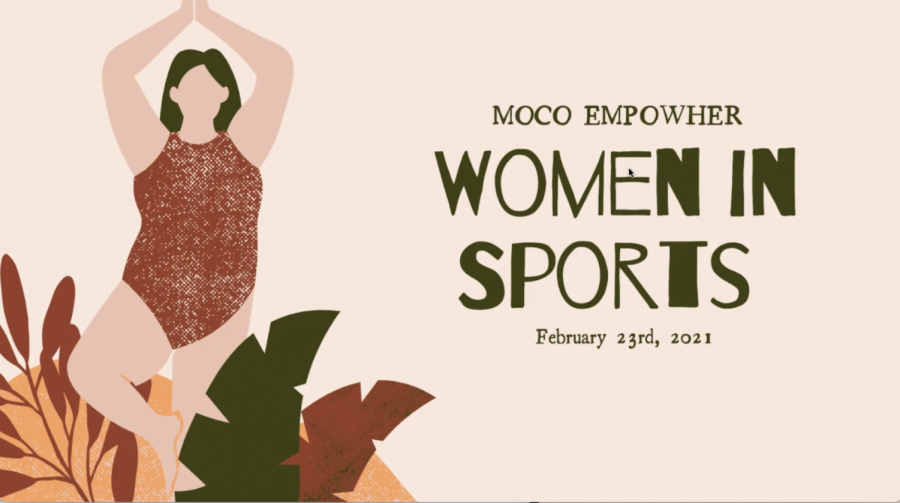 MoCo EmpowHER's Women in Sports was an hour and a half event. Around 40 people from around the county participated.

A welcoming, uplifting and inspiring group of young women, MoCo EmpowHER strives to create a safe space for women to be supported and grow as leaders. First founded by past MCPS SMOB Ananya Tadikonda in 2017, it now engages in many different events such as the Women in Sports virtual panel on Feb. 23.

“We have a series of these events called ‘Women in’, so women in comedy, women in politics, women in education,” RMHS senior and MoCo EmpowHER service director, Rediet Ghebrehiwet, said. “The point is to connect our members to successful, incredible women in these fields, to see themselves in these positions, learn from their journey, hear from their experiences and get any advice.”

Usually, these events are at Carver, MCPS’ headquarters in Rockville, but since the pandemic began, events have been adapted virtually. MoCo EmpowHER is open membership, so anyone who wants to participate is able to join as they please without a high commitment.

“Roughly we get around 40 people participating to 70 or so, but it varies per event,” Ghebrehiwet said. “Prior to this switch to online everything, we were limited to just some people in the county since Carver is in the middle of MCPS, but it was still pretty far for people in certain consortiums, so being online is more accessible to more people.”

The event began with “speed dating” breakout rooms. Each time participants were moved to a new breakout room, an additional person and an additional minute to speak were added. In the rooms, discussion questions such as “what is your favorite sport to participate in or binge?” or “do you think athletes should be paid such high salaries?” were raised.

“The point of these is one, to have those quick conversations and being able to communicate in that very short period of time and two, to connect with students all over the county while widening your circle and having a huge female supporting, comforting community,” Ghebrehiwet said.

Following that, everyone was split into three breakout rooms and every 20 minutes the panelists rotated. In these smaller groups, participants were free to ask questions on topics such as the panelist’s college and career experiences as well as what it is like being a female in the sports field.

“My favorite was Heather O’Reilly. Something about the way she presented herself, like her whole presentation, was very dynamic and engaging,” Ghebrehiwet said. “She is incredibly accomplished; she was on the Women’s US National soccer team and won the world cup. Just hearing about her experiences was really inspiring.”

Closing out the event, a group question and answer period with all three panelists in the main room allowed members to get further insight on their experiences as female athletes.

MoCo EmpowHER will continue hosting similar events in the future and always welcome suggestions for future ‘Women in  ’ panels. The organization is open to middle and high schoolers.

“The biggest thing that attracted me at first was just the community,” Ghebrehiwet said. “When I first joined I was on the younger side, and I kind of felt intimidated because it was a county-wide meeting and I didn’t know many people there, but the community of girls was really welcoming and approachable.”

To get involved, email at [email protected], follow @mocoempowher on Instagram, reach out to the co-chairs Hana O’Looney and Isra Qadri, or fill out the contact form on https://www.mocoempowher.org/.