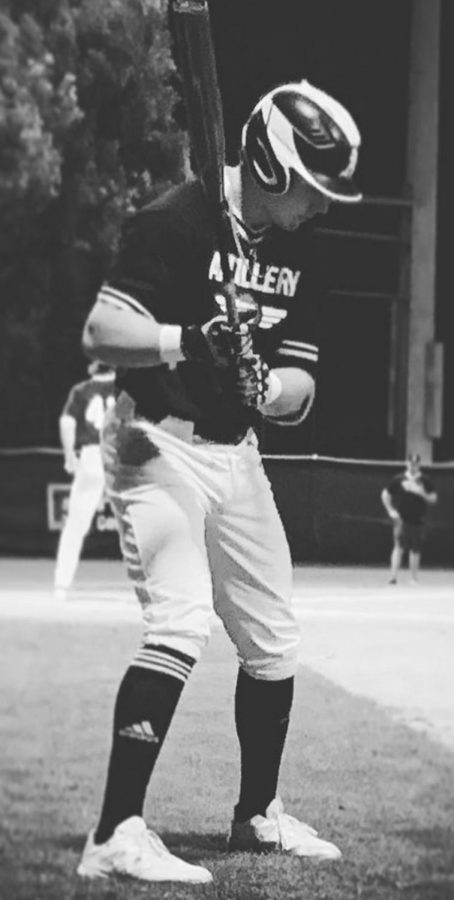 Wake Forest baseball commit Christopher Hacopian, gets ready to hit in a game this January. He took his talents to play in some tournaments in hopes of a spring season.

Around this time last year, spring sports were getting primed to begin as tryouts were hosted and teams were assembled. Not too long after, COVID-19 began its ravaging tour across the United States, ultimately closing schools and with that, canceling spring sports.

Fall sports such as football, soccer, cross country, field hockey have already begun the watered-down process of tryouts and team selection. Spring sports on the other hand, have yet to start their official processes, but are ready for a comeback season.

“When I heard MCPS (Montgomery County Public Schools) was planning on having a full season for spring sports, I was stoked,” Christopher Hacopian, a sophomore baseball player and Wake Forest commit, said. “I’m just really excited to get out there and represent my school. I think we had a really good shot at states last year so I want to continue that trend and win a state title.”

Yet, to even play his first official game at WCHS’s Chuck Stevens field, the state title Christopher and others hope for is still in jeopardy, as playoffs are in question. The extremes of proposals made range from having traditional playoffs, to not having them at all. The most likely plan to occur features a modified playoff schedule in which sectional champions would be crowned to avoid long travel across the state.

“I would really like there to be full playoffs because I think it adds to the reason we play,” Hacopian said. “Baseball is all fun and games, but at the end of the day we play high school baseball to win a state championship.”

Before baseball and the rest of the spring sports were a definite go, there was a lot of uncertainty for athletes that were at risk of losing two years of their high school career.

“To be honest with you, I didn’t really have a backup plan,” Hacopian said.  “I was considering transferring to a private school for a little while, but in the end, I banked on the public school season happening and it paid off.”

According to MCPS’s website, the spring season will begin on April 17 and run through June 19, 2021. This website is the main source of information for anyone who wants to know what’s going on with MCPS spring sports.

“I have been getting all of my information from friends and family,” sophomore baseball player Eric Chen said. “I also check the county twitter page to see if there was any information my parents missed.”

Athletes like Chen use this information to help them prepare for the season that was in jeopardy for so long. With so many outside factors influencing these athletes, staying in peak condition and being ready at all times is crucial to having success this upcoming spring.

“I really had to change up my offseason routine to fit the new start date that the county proposed.” Chen said. “It’s not easy to prepare and get myself mentally and physically ready  for a season that was not always going to happen due to the unsafe conditions.”

Even with the lowest new cases rate since October, according to the official Maryland government website, the issue of safety is another story as kids fight with their parents just to get out onto the playing field.

“My mom was definitely hesitant at first and actually said no initially,” Chen said. “However, I convinced her that I was going to be safe and maintain social distancing, and now I’m allowed to participate.”

The importance of sports goes beyond the game and into the bond athletes form with each other on and off the field. With these bonds stripped from the spring sport athletes last year, they believe this year is as important as ever.

“This year is super important to me because I get to go out there and hang out with my friends while playing the sport I love,” Chen said. “We lost the season last year so having this year’s season is amazing and I am looking forward to getting started.”