Athlete of the Month: Daniella Lew 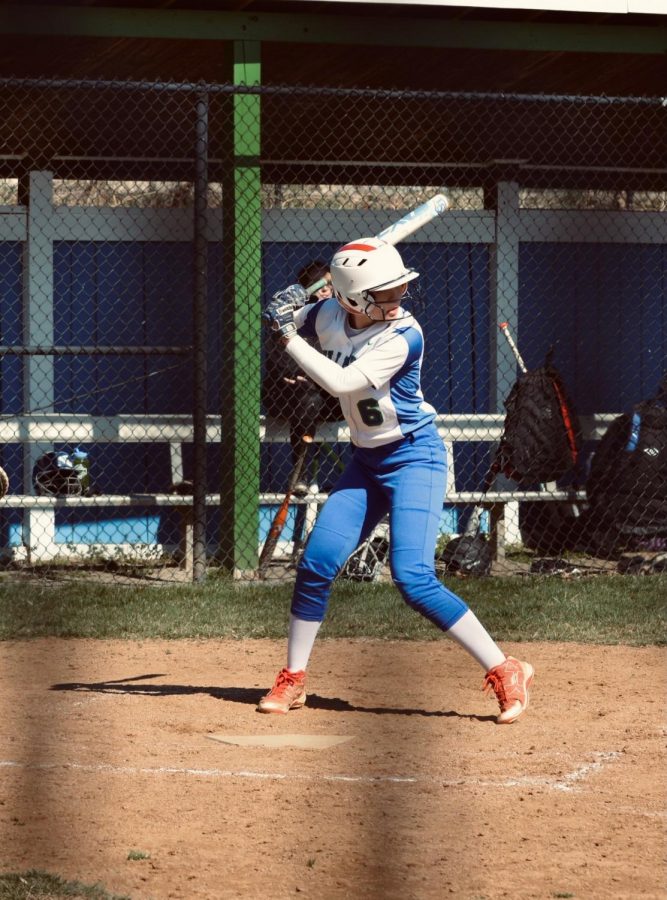 Daniella Lew, who wears number six on her jersey, gets in her batting stance at a home game. Pre-COVID, Lew played many in-person games, both at WCHS and at the opposing schools.

Whether she is sitting in the dugout with her teammates, traveling to various tournaments, adapting to last seasons’ abrupt end due to COVID-19 or going head to head with WCHS’ rivals, junior Daniella Lew always has her eye on the prize. Ever since age seven, she has been passionate about softball and has stuck with it ever since.

It all began with a tee, a bat and a ball, which is often how many baseball and softball players start off. Eventually, following in her sister’s footsteps, Lew’s interest in tee-ball transitioned into a love for softball; she currently plays shortstop and pitches for the WCHS team.

“The reason why I started playing softball was because my older sister Britany, who currently plays at Georgetown University, was already involved in the sport and my parents wanted me to try it out,” Lew said.

Lew has played on the WCHS softball team for all her three years in high school and enjoys being able to play with her friends that she goes to school with. Additionally, she has played on a variety of travel teams, including her current team called the VA Glory Fastpitch.

“The experience has been very fun because I have made so many new friends, and I love seeing, sometimes even playing against, my former teammates at tournaments,” Lew said.

Having played softball for so many years, Lew has found that her role on her teams evolved from being just a player to a leader for the younger players to look up to. This is especially evident on her travel team, where she is one of the older players.

“Due to COVID, the last time I played on the WCHS softball field was my freshman year, so I didn’t really need to worry about being a role-model,” Lew said. “Significantly, on my travel softball team, however, most of my teammates are freshmen, so last year’s and this year’s season has helped me lead the younger players and prepare me for this high school season.”

Throughout her softball career, Lew has had a variety of role-models and inspirations to look up to. Most notably, she admires fellow shortstop Sis Bates, who plays for the University of Washington, because of her passion for the sport, work ethic and ability to always have fun.

She has also learned a great deal from her coach, Andrew Sonnabend. He has known Lew since her freshman year and appreciates her strong work ethic and focus.

“When Daniella steps up to the plate there is no more focused ballplayer in the area,” Sonnabend said. “She puts in so much work on her game, always looking for ways to improve.”

With the presence of COVID-19, unfortunately, Lew missed out on an in-person WCHS softball season, but she still stays motivated and continues to keep up her skills during this time. She has also been lucky enough to be able to practice with her travel team, which has helped her remain on track.

“I have practices with my travel softball team every Sunday in an indoor turf-based sports facility (we wear masks the whole time), where we work on hitting and fielding,” Lew said. “I also practice on my own and workout at home.”

In addition to these COVID-related challenges, Lew has had to face the additional pressure of the college recruitment process during a pandemic. This added a new aspect of uncertainty to an already very stressful process. Despite this, Lew continued to stay focused, which paid off in the end. She is now verbally committed to play softball at George Washington University, which is a vast accomplishment for a junior.

“Last year, many of our events that my travel softball team and I were attending originally allowed college coaches to come watch, but due to COVID, college coaches could only watch games online through live-broadcasting,” Lew said. “In addition, the NCAA Dead Period, the restriction of all in-person contact between athletes and D1 coaches, was extended to April 15, 2021, so that meant no camps or visits for athletes.”

Although the past season has been far from typical, Lew has remained positive and looks forward to her future with softball and her education at George Washington University. She is not sure if she wants to continue playing after college, but does know that she will want to focus on her studies and career. With her many accomplishments she has had throughout her high school years, it is clear that Lew has a bright future ahead and her coaches and teammates can’t wait to see what she does next!

“She led the team in the most pitching categories as a freshman and only missed out on All-Division pitching honors because she was named 1st team as an infielder (you can’t be named both),” Sonnabend said. “Daniella was on of the only three freshmen to be name the All Met team in 2019, and she proudly carries on the family tradition of wearing #6, taking the number her sister wore for the four years prior to her arrival.”