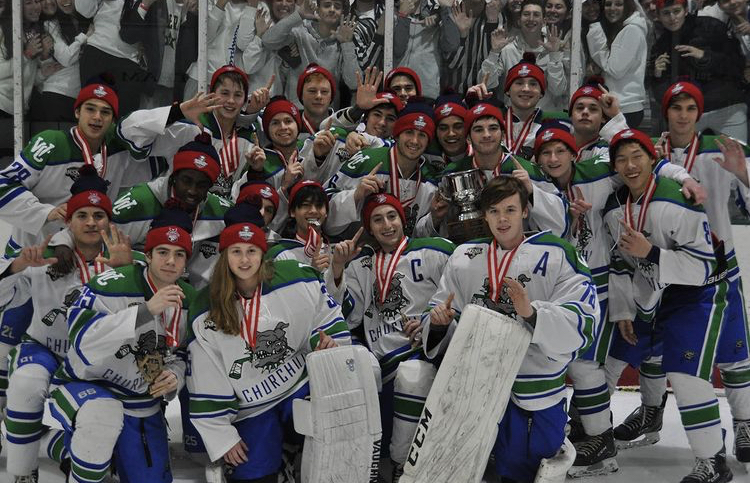 After winning their sixth straight Maryland State Championship in 2020, the WCHS hockey team poses for a group photo on the ice right after the game. The players are wearing their championship medals and hats.

Immediately after winning their sixth consecutive Maryland State Hockey League championship, COVID-19 arrived and swept away all remaining sports for the 2020 school year. Exactly a year after beginning their season in 2019, the WCHS varsity hockey team would yet again have to prepare for their upcoming season, but this time they faced another challenge.

COVID-19, which came close to interfering with last year’s season, will be one of the team’s biggest challenges for the upcoming season. During the 2019-2020 season the team did not face much of a challenge other than a few of its Montgomery County foes, but this year they will not only be battling other teams, but battling the pandemic altogether.

“It definitely sucks that there are no fans and the season isn’t very ideal, but I’m extremely happy that we at least get a chance to just play hockey and have another opportunity to win a state championship,” senior Sam Parsons, a left winger, said.

The team usually has over two months to begin to practice and prepare for games, however this year they were not given that much time, with only a few weeks of practice before the 2020-2021 season. They had their first practice on Oct. 8 this year, while last year they began their season on Nov. 13.

“I still feel prepared for the season even though we’ve had less time to practice. I play club all year so I’ve always been ready for the season. Everyone else on the team also seems to be doing well, so I think we’re still going to have a big year,” Parsons said.

The team opened its season against Walter Johnson and came out firing on all cylinders. The team won with a final score of 9-0 and proved that the departure of their head coach and a few key seniors from the year before did not change what they were capable of. Junior captain Jack Pogorelc scored two of the team’s nine goals. Last season the team tied against Walter Johnson in their two-game series, but this year they opened the series strong and put themselves on a track where they hopefully will continue their winning streak.

The team played again a week later against another Montgomery County competitor, Walt Whitman. The Bulldogs opened the game with a 7-0 lead after the first period, making it almost impossible for any team to come back. Parsons had two goals and two assists, which helped the team win by a landslide. The Bulldogs finished the game with an 11-2 victory, moving them to 2-0. They now have won back to back games both by a margin of nine goals to open their season.

“The season started a lot faster than normal so we might have got a little behind on our conditioning as a team. But in the short time we had to prepare for our first games, we had extremely intense practices. I definitely feel the team is prepared for the season and I think I can help lead them to another State Title,” junior Jack Pogorelc, a defensemen and team captain, said.

The team had their third game of the season on Dec. 4 where they were set to match up against Bethesda-Chevy Chase. The Bulldogs first faced B-CC in the state championship in 2020 and defeated them in a 4-3 thriller. This year things were a bit different. Not only were there no state championship tier crowd, since there were no fans at all, but the WCHS hockey team faced a loss.

In their first meeting of this season, and most likely not their last, the Bulldogs were defeated by B-CC with a final score of 5-2. Josh Wong, a freshman forward, had one of the Bulldogs’ only two goals in their loss. Wong has played just three games in a WCHS jersey, but has scored in every one of the games played.

“This year might be a little difficult for the younger kids since they’re new to the team and haven’t even been to school yet to meet anyone. I’ve been making sure that they’re feeling a part of the team and blending in with the rest of the guys,” Pogorelc said.

Chasing their seventh consecutive state title, the Bulldogs are going to have to get through a few roadblocks, on and off the ice. The team hadn’t had a loss to a Montgomery County opponent until Jan. 31 of last year’s season. With a loss in their third game of the season they might be up for a bigger challenge this year than they thought.

It has been a year full of many changes due to COVID-19, but one thing that cannot change are the winning ways of the WCHS hockey team. Whether they have to wear masks on the ice or be socially-distanced while sitting on the bench, the team looks to battle through more than just other team’s to find success this year. Even though the team is only playing one game a week as of now, they are lucky to have any opportunity at all, especially since no other fall or winter sports have been able to play this school year.

“It’s unfortunate that you never know when the season may stop for a short period or if someone may get COVID, but I’m just extremely happy that we’re playing every week and that I’m having some type of senior season,” Parsons said.