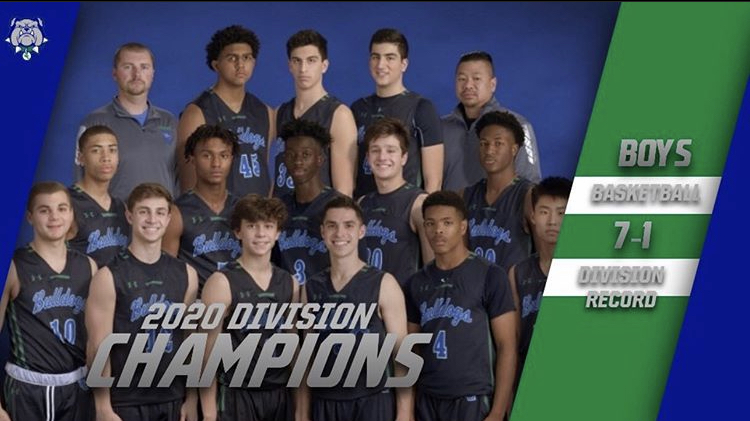 The 2020 WCHS Boys Varsity basketball team is shown in the picture with two of their coaches. The photo was taken at the beginning of the basketball season. The text next to the image shows how dominant the team was, starting their season off with a 7-1 record.

After winning the 2020 Regional Championship for 4A West Region 1, the WCHS varsity boys basketball team looks to defend their title this coming winter. With a delayed season scheduled to start on Feb. 1 due to COVID-19, the team has more than enough time to fully prepare. The only doubt is whether or not they will have enough in-person training as a team to be able to fully prepare themselves for a successful season.

In the past, the boys basketball team prepared for their season by having team workouts for all players interested in trying out. These workouts included lifting, shooting around and open gym pickup games. Due to COVID-19, the team has to take a different approach to practicing for this season.

“I’d much rather be in person with the rest of the team even if the workouts are difficult rather than being stuck at home on these virtual meetings,” junior Colin Moylan, a member of the boys basketball player, said.

The team started doing Zoom meetings this fall since they are unable to be at school to workout. These Zoom meetings consist of breaking down game film from last year, conditioning and occasionally having guest speakers that teach them not only about basketball but also self-advertisement. Recently they had guest speaker Tyler Hines, who played professional basketball overseas, including playing for Peristeri Basketball Club in Greece for a season.

The Zoom meetings usually have 30 students along with three coaches, making it quite concentrated. Not everyone on the Zoom was previously on the team. There are many new freshmen and other students that attend the meetings that have yet to put on a Bulldog uniform, but hope to have the opportunity one day.

“As a program, it’s definitely helping us because we meet the younger kids that have futures at Churchill and they get to meet the coaches and the kids that are currently on the team,” junior Andrew Silver, a guard on the team, said.

There are only six returning players from the 2020 Regional Championship winning squad, so the team will have to look to some new players to step up and make a difference. Many of these athletes, that will be future role players on the team, are the ones that attend the Zoom calls. These role players learn from the team’s past mistakes by watching film and improving their physical side of the game by doing group workouts while at home. Although they do not have access to the WCHS weight room, the body weight workouts done at home are still tough and build muscle. However, many of the players would still much rather be training together in person because of the bond between teammates training together creates.

The Zoom calls take place four times every week, which is more rigorous than the in-person workouts that only happened two to three times per week. Since the players have more frequent calls, they are able to keep in touch with one another and bond as a team.

Although not everyone is very vocal during the meetings since the older players and coaches do most of the speaking, the meetings stay engaging by having the players compete in trivia games. By encompassing various aspects of the sport of basketball into the Zooms, the meetings are very progressive for the players. Doing some new things that they have never done before, like analyzing NBA defensive principles, the meetings prove to be more than just a time to socialize.

“The Zoom workouts are only making us more eager to play because we want to get out on the court even more now that we know what it’s like to not be able to play. I think everyone on the team feels the same way and is hungry to compete against one another in practices,” Silver said.

Even though the Zoom calls are not ideal for many, they are still better than nothing. Doing anything at all with a team builds chemistry, even through these virtual circumstances. During the offseason, not much film is watched and evaluated by players, so being able to look back at past mistakes and learn from them is huge and something new for the team. Not only do these Zoom calls physically improve the players’ skills, but they also psychologically improve them, which is something that in-person workouts did not focus on.

“For what we have, I think these Zoom meetings are great because they help people know what to do in a real game situation, so that when we finally do step back on the court we will be ready to play with less mistakes,” Moylan said.