Athlete of the Month: Hannah Hankim 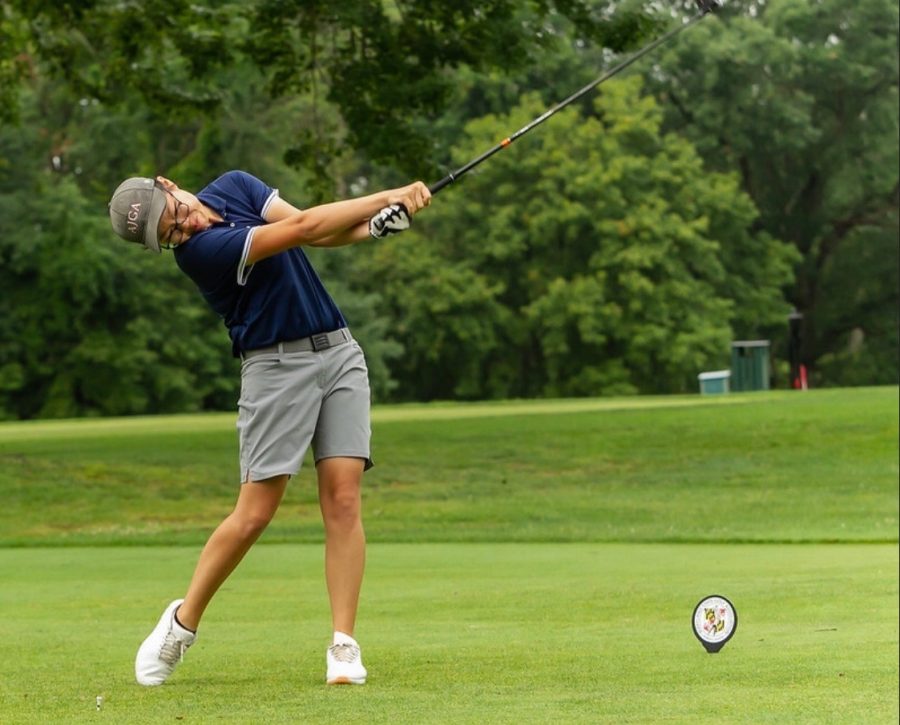 Hankim keeps perfect form as she follows through the ball. Hankim was one of the team's most consistent players throughout the season.

Practicing three to four times a week with the team, as well as on her own, junior Hannah Hankim has dedicated most of her after-school life to golf. Hankim has been golfing since she was ten years old and has been on the varsity team since her freshman year. Hankim is finishing her season as an overall state champion, a member of the all-division team and the second best golfer in the state.

Being a golfer means there are many challenges to be faced. There is the constant teasing and mocking of the sport, the lack of fans and support and balancing being a teammate while practicing with the possible competition for the next match. However, Hankim does not let anything stop her.

“I definitely do wish that we had more people come out to our matches, but I also understand that it is hard because they can be so far away,” Hankim said. “No matter the outcome of our fans, I still try to keep a positive outlook on each match, and try to motivate my teammates as best we can.”

Hankim is known to be a great player. Her scores help in each match and her teammates can also always count on her to have a consistent, successful score. When Hankim steps onto a course, it is time to work. Her focus is laser sharp and she knows what her goal is and how to achieve it.

“Hannah had a regular season scoring average of 36.33, which comes out to .33 shots over par,” WCHS golf coach Robert Tarzy said. “That was the best on our team and lowest amongst girls in the county. She shot 74 and 73 at the state tournament. She was incredibly consistent all year and it’s a testament to her mental game and toughness.”

Not only is Hankim a strong player on the team, constantly keeping the team in good standings with her score, but she is also an amazing teammate and leader.

“She is willing to help out players that are not quite at her level of play,” Tarzy said. “She’s regularly looking at other girl’s swings and helping them with technique and course strategy. I always think instruction is better received from a peer than a coach, so it’s great to see her helping her teammates improve.”

As a leader, it is very important to be able to balance being a teammate as well as a player. However, Hankim has combined both into the perfect friend, as well as motivator and role model.

“Hannah is someone that we all look up to,” sophomore teammate Phoebe Qian said. “We would not be as dominant of a team without her. She drives everyone to do better and always helps us with our golf game.”

While Hankim certainly enjoys being a dominating force on the course, she also enjoys being able to have fun with her teammates and being there as a friend for all of them.

“What really matters to me is that I get to spend time doing what I love with a group of people that I call my family,” Hankim said. “Not only do we all want to win, but we also are so close that it makes attending practices and going to matches even better.”

Hankim not only inspires her teammates with her skill, but is also an all-around role model and someone that everyone on the team looks up to.

“Hannah deserves athlete of the month because she was the most consistent player on a state championship winning golf season,” Tarzy said. “She was the only player on the team to have her score count in every single event all year. She finished with the lowest scoring average amongst girls in the county, and finished 2nd at states as an individual. Likely aided by her mental game, her consistency was second to no one and a huge reason why we were able to take home the state championship and a few other trophies.”