Athlete of the Month: Mateo Noguera 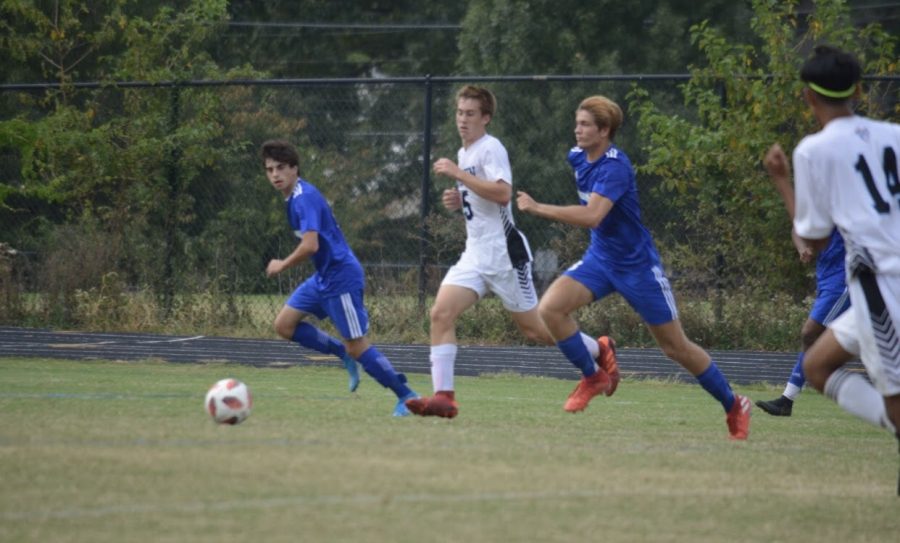 Mateo Noguera (right, blue) has been playing soccer since he was three years old. Now as a senior captain, Noguera still shines on the field.

Training six days and playing up to two games a week, senior captain Mateo Noguera has dedicated his Falls to soccer since he was a freshman. Noguera has been playing soccer since he was only three years old and made the WCHS varsity team his sophomore year. As his final regular season comes to a close, Noguera is finishing with an impressive four goals and one assist.

Coming from a smaller club, Noguera faced some challenges. Many of the players trying out already knew each other from previous teams, so Noguera was a new face to many. However, he quickly made himself a dominant force on the field and became friends with the rest of the team.

“It was always part of the plan that I was going to try out for the team,” Noguera said. “But I didn’t really know the guys trying out, they knew each other more. Once I joined the team, we all clicked, which was good.”

“My initial impression of Mateo that had me put him on the varsity as a sophomore was his ability to work hard on the field and constantly hustle,” Arnold Tarzy, the head coach, said.

As a captain on the team, Noguera has a big leadership role. It was decided at the end of the 2018 season that he would be a captain as a senior and Noguera knew he had a great responsibility.

“It was a really big jump from being a field player to being the captain of the team,” Noguera said. “I learned a lot about leadership and in the beginning, I was a little intimidated by the task but by the end of the season, I have gotten a lot more comfortable with the role.”

As a captain, it is very important to be able to balance being a teammate, a player and a leader. However, Noguera managed to excel in each category and combine all three perfectly.

“Not only does Mateo affect the flow of the game with his abilities, but he also displays a lot of leadership,” junior teammate Al Nie said. “His soccer talent helps him make important plays consistently and he keeps our team cool headed during high pressure situations.”

Being a leader is important to Noguera but being a teammate is just as much to him as well. Being able to play the sport he is so passionate about, makes the training and hard work worth it.

“At the end of the day, I am just happy to get to play the sport that I love and with a great group of guys who work hard,” Noguera said. “We’re all there with the common goal of working hard, having fun and winning games.”

Noguera has set a high standard as a player on the team. Not only does he inspire his teammates with his skill, but he is an all-around role model and someone that everyone on the team looks up to.

“Mateo deserves to be the athlete of the month because he is extremely talented and extremely hard working,” Nie said. “He comes every day to training ready to give his all with physical effort and mental focus and helps create a great training environment. He makes a huge difference on the field with his skills, and an equally large difference off the field by leading our team by example. He is what every athlete should aspire to be.”