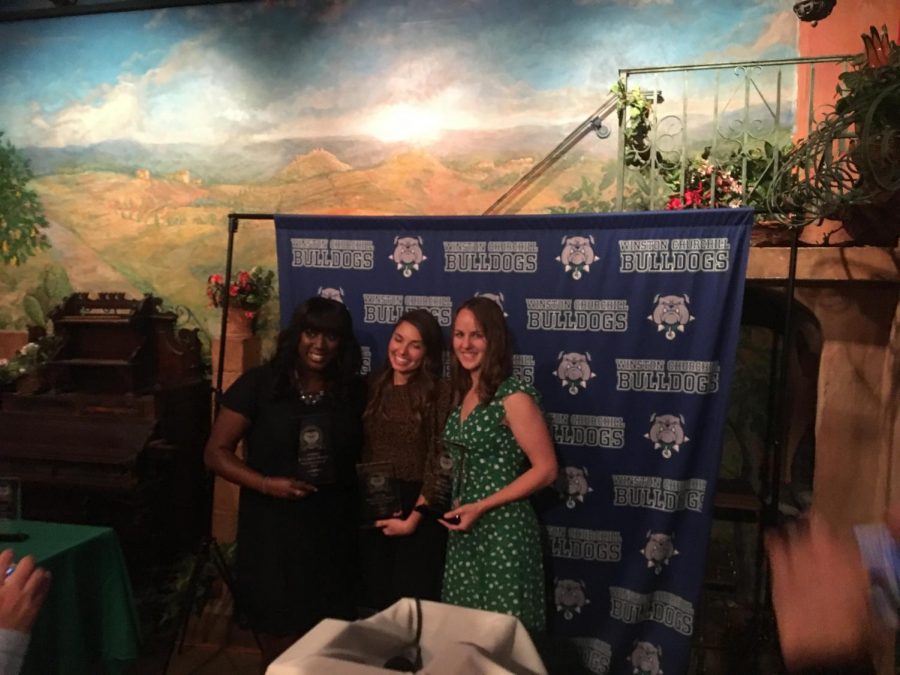 Peter Menke, the WCHS Athletic Director from 1989 to 1997, began the school’s Athletics Hall of Fame in 1995. Nearly 25 years later, WCHS inducted its fourth class, and honored the man who started it all.

According to current WCHS Athletic Director Jesse Smith, Menke started the Hall of Fame to encourage and inspire athletes. Menke believed that sports create healthy habits that will last a lifetime. Menke’s daughter, Samantha, accepted the award in honor of her father, who passed away in 2011.

Although the date was a bit unlucky for die-hard Nationals fans due to the World Series game happening that evening, the WCHS Booster Club and Athletics Department put together a memorable evening for the inductees. (And attendees were home in time to see the Astros win game four.)

The varsity girls basketball teams of 2001-2002 and 2002-2003 were also honored along with their coaches: Pat Fisher, Christopher Campbell, Ed Peterson and Lauren McCabe Dommel.

There were roughly 95 attendees at the dinner, and people all around were reconnecting and hugging. The celebration included WCHS alumni, their families and supporters sharing their favorite WCHS sports memories. For some, it had been nearly 20 years since they had connected in person.

“It’s incredible to see how much has changed and how little has changed,” state basketball champion Stephanie Holland said, who graduated from WCHS 17 years ago. “It’s been a while since we’ve been in high school but it was such a formative part of our lives so it was just wonderful to hear everyone’s memories and accomplishments and to see where they are today.”

Three track student-athletes: Gariepy-Bogui, McManus and Hannallah Bayly were inducted as well. Gariepy-Bogui, a record setting high jumper, was named Montgomery County Athlete of the Decade (2000-2009), was a four-time Washington Post All-Met Athlete and went on to compete at Villanova University. McManus was the 2008 Class Valedictorian, Nike Indoor Track All-American and went on to run at Vanderbilt University along with Bayly. Bayly was named the Maryland Gatorade Athlete of the Year and still holds the school record in the 3200 meters, which she won the state championship title for in ‘07 and ‘08 indoor track.

“It’s a deserving group,” head of indoor/outdoor track and assistant cross country coach Scott Silverstein said. “I think the best part is that they all got in together. It’s great to see how successful they are, not just in athletics but in life.”

Known for his contagious smile and character, Larry Bellamy, who graduated from WCHS in 1975, was acknowledged for being a member of the school’s first state championship football team in addition to being named to the All-County team his senior year.

As an athletic director, Menke fought for the equality of girls’ sports. There is an annual award at the Paul IV Catholic High School in Fairfax, (where he also worked as an athletic director) named after him that is given to a student who shows the same characteristics he is remembered for: fairness, honesty, positivity and loyalty.

Menke started the Hall of Fame event almost 25 years ago and his tradition still carries on today, bringing WCHS athletes together again to celebrate all of their contributions and accomplishments.

“Everyone was so excited to see each other, a lot of people had not seen their friends in years and watching them interact during the informal parts of the evening was very heartwarming and just really special,” WCHS Booster Club president Draga Dubick said. “I think that was the best part.”