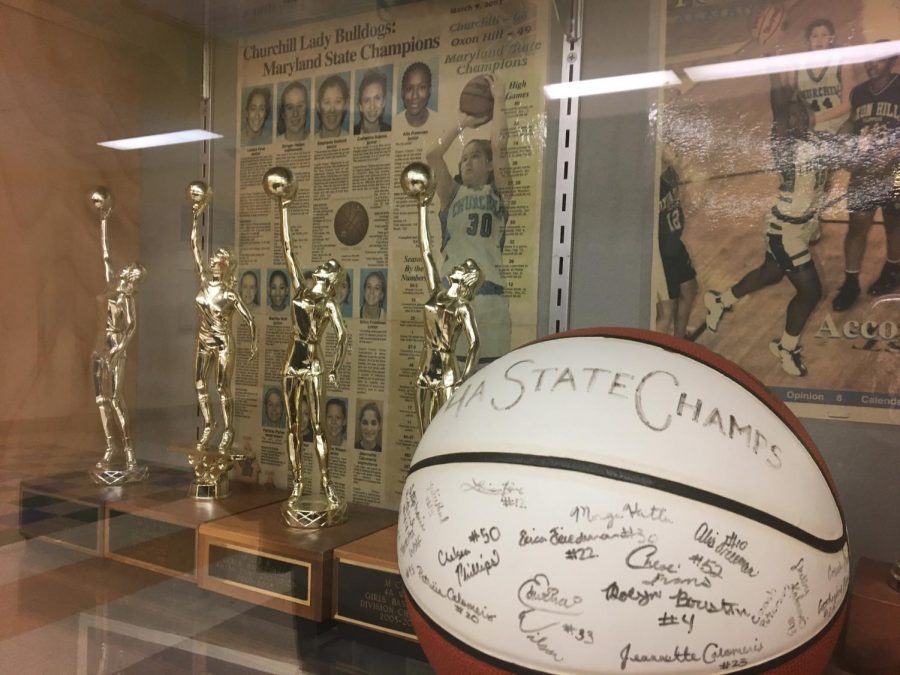 The state championship trophies of the WCHS girls varsity basketball team displayed proudly in front of a news article snippet from 2002 announcing the team's success.

Hatten is one of eight standout athletes, coaches and staff members who will be inducted into the 2019 WCHS Sports Hall of Fame. The Hall of Fame is returning to honor the athletics community for the first time in ten years.

“My mom and my brothers played sports at WCHS so it means a lot to be remembered and celebrated in such an amazing athletics department,” Hatten said.

The varsity girls basketball teams of 2001-2002 and 2002-2003 are also being honored along with their coaches: Pat Fisher, Christopher Campbell and Ed Peterson.

Inductees will be honored Oct. 25 at halftime of the WCHS football game at home against BCC. The following night, there will be a formal induction ceremony at Positano Ristorante Italiano in Bethesda. Tickets are $65 and can be purchased on the WCHS Booster Club website.

Though most of the inductees have since left the WCHS community, current students will recognize one face: Craig Stewart. Better known to students and staff as “Stu” the security guard, he will be inducted for his many contributions to the WCHS community. Since the late 70’s, Stewart has been a vital component in the world of WCHS sports.

“Being with the athletes, watching the games, and stuff like that is really nice,” Stewart said. “That’s what I like the most, working with the students.”

The athletic director when Stewart first started working at WCHS invited him to help out with sporting events. 41 years later, the athletics department is taking the next step to thank him for his longtime dedication.

“He has spent countless nights taking tickets at the gate, cheering on athletes and running events,” athletic director Jesse Smith said. “He has dedicated a large portion of his career to making sure our athletes, families and communities have a great experience while here.”

In addition to being celebrated individually for her contributions as a guard for the girls varsity basketball team, Hatten is a part of both state championship-winning basketball teams being honored as a whole. She feels honored to be inducted now, at a time when the current girls basketball team has so much talent.

But Hatten also wants WCHS student athletes to remember that there is much more to playing sports than winning.

The Hall of Fame event is being run by Smith and the WCHS Booster Club led by President Draga Dubick. Smith said the plan is to host the event every five years.

“I think it’s really important for our school to continue to recognize the great things that our athletes did and continue to do once leaving here,” Smith added.

The Booster Club and athletics department organized a committee that nominated this year’s inductees, composed of WCHS’s longest tenured coaches and parent volunteers. Nominees had to have graduated from WCHS at least ten years ago and each nominee was evaluated based on their contributions to their team and overall community.

“We really believe in the importance of bringing back alumni to our campus,” Dubick said. “Bringing back these highly accomplished student athletes gives us one more thing to be proud of.”