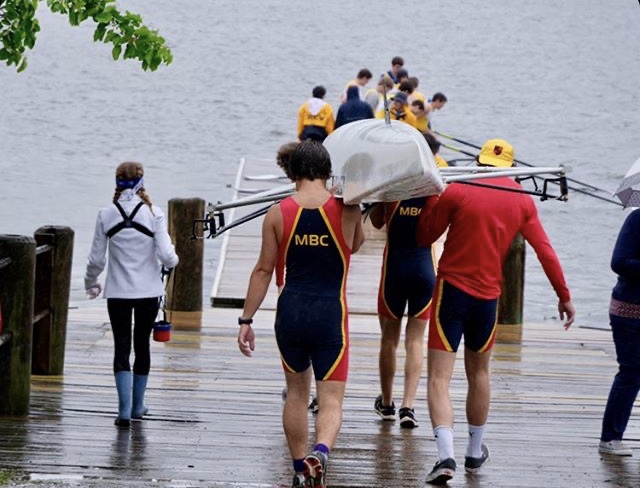 Members of the Montgomery Boat Club carry a shell to the water at the previous practice location, the Anacostia River. Practicing here was difficult due to the long travel times, which led to a short amount of time in the water and late arrivals, as well as the limited space available for them to prepare for races.

Major changes have been made to the WCHS crew team, setting rowers up to reach their full potential for this season and many more to come. Being a part of the rowing team allows students to work on their leadership skills, develop new friendships and participate in a competitive sport that they might not have had prior experience in.

Joel Berinstein, sophomore at WCHS, joined crew as a freshman and saw it as the perfect opportunity to try something new.

“A lot has changed,” Berinstein said. “Since I’ve joined, the head coach was switched, along with other coaches coming and leaving. We’ve changed our team name from Montgomery Boat Club to the DC National Rowing Club, as well as the team colors.”

Due to previous transportation and schedule conflicts, the team’s rowing location changed from the Anacostia River in Bladensburg, Md. to the Calleva in Potomac, Md. This has made the drive much more convenient for rowers trying to get from school to practice efficiently.

“Our old location in Bladensburg was an hour away, and we would only get an hour and a half of practice in before getting home at 7 pm,” Berinstein said. “At Calleva, which is only about 30 minutes away, we are able to get at least two hours of practice in before getting home at about 6:30 pm. On the water, every minute counts, so this gave us a lot more flexibility when practicing.”

In addition to the easier transportation methods, Calleva is not as cluttered as the previous destination. Due to there being competition for boats and limited space for practicing at Anacostia, the move made it much easier for the team to prepare for regattas (races that take place 4-6 times per season at other locations). Even though regattas are scattered throughout the year, the team still strives to push each other and do their best at every practice. The river is well taken care of and is much bigger. This allows the rowers to race side by side, which is ideal for the team.

“The Anacostia was really small, and we would always run into other crews,” Berinstein said. “Now at the Potomac, we have close to three times the width. We can have four boats race each other, while having room for the coaches to move around and watch all of us. This has made practice more efficient and honestly more enjoyable.”

One of the most important jobs in crew is the coxswain, the person in charge of directing the boat. WCHS sophomore Callie Burd, coxswain for the DC National Rowing Club, thinks that the beautiful environment is one of the many reasons why crew members look forward to going to practice.

“One of the things that originally drew me towards this sport was being on the water,”Burd said.  “It’s great to be with friends in nature out on the water after a long and stressful day at school.”

Burd also found that more individual attention from coaches and time spent out of the water allowed the team to get into better shape and become more accustomed to long practices.

“My team and coaches have expanded and a lot of people have gotten much stronger,” Burd said. “I have also improved a lot in my coxing abilities after a summer of camps and training.”

These changes have allowed the crew team to not only get closer as friends, but as teammates focusing on rowing and improving their skills.

“Everyone on the team is close and we all look out for each other,” Berinstein said.  “I honestly feel a really close relationship between every member. Just looking ahead at the scenery and being able to relax is an amazing feeling.”