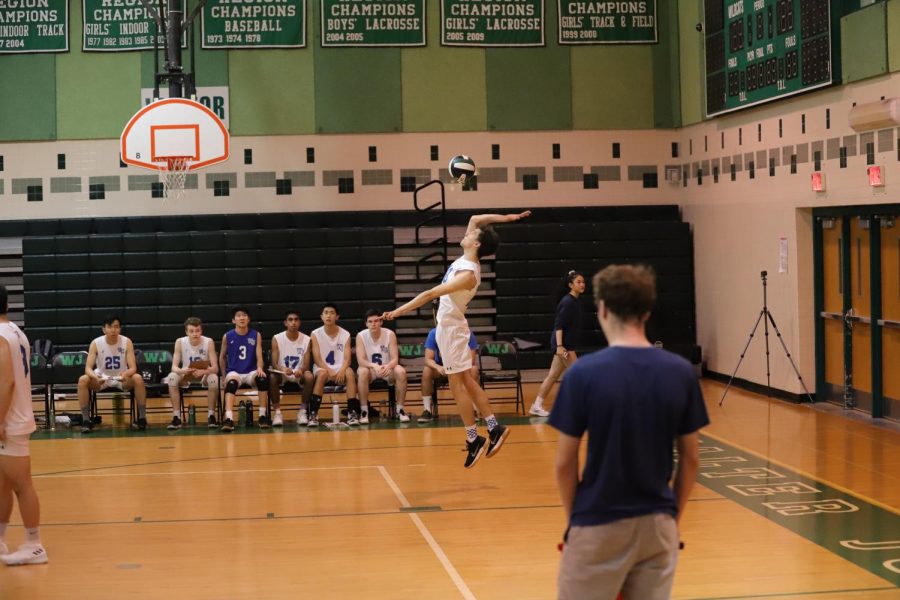 14 kills. 3 blocks. Number ten does it yet again. For the past five years, Ben Tombini has continued to master the game of volleyball. Ever since moving to WCHS from Brazil three years ago, he has been on the WCHS boys varsity volleyball team.

This number three seed team finished 10-1 in the regular season and made it to the county semifinals facing the number two seed, Walter Johnson High School, in their last match of the season.
The team worked extremely hard this season, everyday during practices and games.

During their match against Walter Johnson High School, the team played a very intense match that led to it all coming down to the last set.

“My favorite game was our last game versus WJ in the semifinals,” senior Tombini said. “We lost, but we never played better. We were in front of a full crowd, which is rare for volleyball games. Even though it was not the outcome that we wanted, we definitely did not disappoint our fans.”

Playing volleyball was more than just a sport to our June Athlete of the Month. It was an opportunity that fostered amazing friendships and support from everyone around him.

“My favorite part of being on the team are my teammates,” Tombini said. “They taught me so much on and off the court and made playing volleyball so much more fun. They are what I will miss the most, no doubt. They are my family and it is going the be different playing without them.”

This was Tombini’s last season as he is a senior. Tombini has undoubtedly left a lasting impact on his teammates as well. Bonding as a team on and off the court, this team had a very successful season.

“Ben Tombini is extremely hardworking, always encouraging and caring for us,” senior Justin Jin said. “Both in athletics and as a friend.”

Jin along with Tombini are the two seniors on the team this season.

Tombini plays middle, always trying to block his opponents’ hits from wherever they land on the court.
According to junior Andy Jin, while the middle position is typically dominated by extremely tall people, Tombini is unstoppable due to his dedicated work ethic. Tombini always grinded during practice and kept the team hyped up.

“The best part about the sport is roofing (blocking) the opposing hitter because the sensation you get from a play like that is indescribable,” Tombini said.

Ready to embark on his journey after high school, Tombini has certainly been a crucial component in this team’s success.

During the WCHS versus Clarksburg match, Tombini had 11 kills, six blocks, and one ace. Leading the team, Tombini has served as a role model both on and off the court.

Joining the team was an opportunity to both showcase his skills and develop a new family of friends. After graduating from WCHS, Tombini has left a huge positive impact on the school and the team.

“I’m proud of our team,” Tombini said. “We grew so much throughout this season as players and as people. We became a family, and I could not be more proud of what we achieved.”