Student-athlete on the fast-track to success 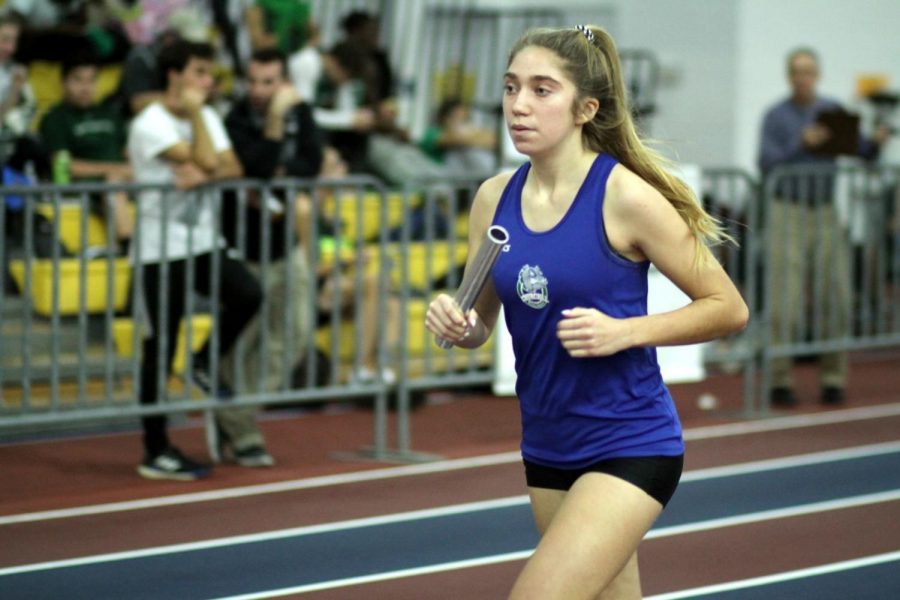 Alex Primich sprints to the finish line at the 4A West Regional Championships on Feb. 7.

Sophomore Alex Primich is on the varsity track team and she also plays travel soccer. She has been running since the seventh grade, but only started running competitively in ninth grade.

“To me, the best part of running is feeling proud of what you accomplish,” Primich said. “When you run a workout and are completely exhausted but you know that you did your best, it is the best feeling. Or when you run a race and know you did well it just puts you in the best mood; nothing can bring you down.”

According to MOCO running, Primich performed well in three events at the West Regionals. She finished third in the 1,600-meter race to qualify for States with a 5:36. Then, on Feb. 19, she finished 11th in the mile with a 5:42. This was her first individual event ever at states.
Coach and social studies teacher Jacobson is proud of Primich’s efforts on the team and her positive attitude.

“She is always willing to learn,” Jacobson said. “She always wants to get better. She really wants to be the best that she can be.”

Primich has also grown through her setbacks.

“I have had a lot of setbacks, but particularly this season I didn’t really have another girl to run with during workouts, so the coaches told me I had to start running with the boys,” Primich said. “It is extremely difficult but they have definitely made a difference in my running.”

Coach Jacobson agrees that she has improved a lot due to all of her workouts with the boys.

“Her best event is the mile, and she’s been able to get her time down to a 5:21. That’s her personal record,” Jacobson said.

Primich now runs against some of the best runners in Maryland.

“I actually qualified for states this year in the mile and it is really not something to be taken for granted,” Primich said. “I am super excited.”

Primich runs every day, including after school, except on Sundays. The workout routine alternates daily. One day will be some sort of sprint or distance workout consisting of anywhere from 200’s to 1600’s. Then, the next day, they will run out for 2-6 miles. The distance is about 3 miles daily but it could be anywhere up to 6.

According to Jacobson, she is so skilled at soccer that she probably will not continue to pursue running in college.

“It is hard to say because she’s such a good soccer player,” Jacobson said. “She is being recruited for soccer, so I think she is definitely doing that in college, but she can still do track. It might be advantageous to do both because colleges like that. It depends where she goes.”

As a talented double-sport athlete, the choice will ultimately be up to her. Either way, she gets to do something she loves.

“I do not know what running will bring me in the future,” Primich said, “I just know that I absolutely love the team and although it’s a really tough sport both physically and mentally I will definitely continue to pursue it in high school.”