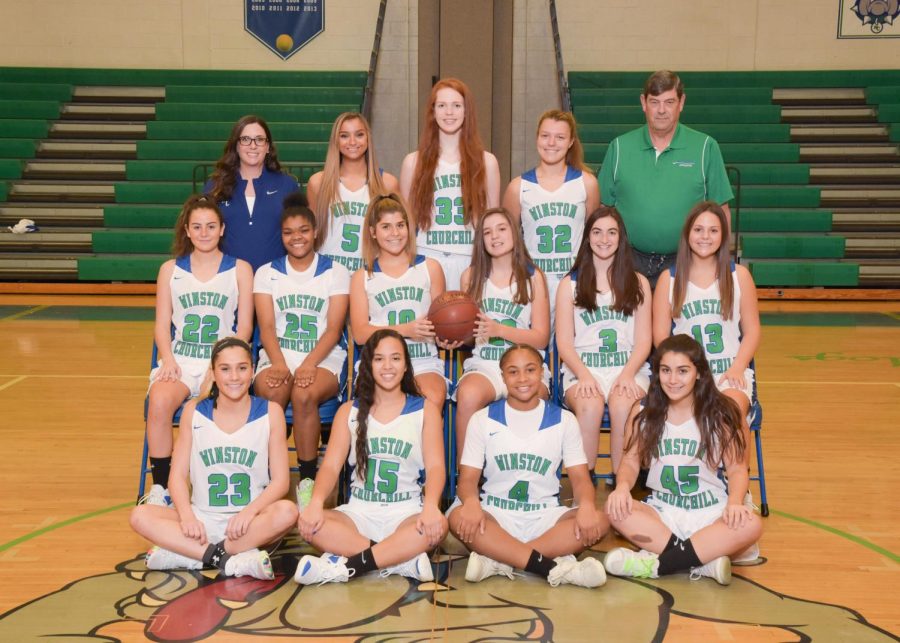 The WCHS varsity girls basketball team takes a photo with their two coaches. The team is led by co-captains senior Kamryn Testa and junior Brittani Martin.

With another season filled with excitement and energy, the WCHS girls varsity basketball team continues to dominate its competition. Continuously practicing hard six days a week, the team is 13-1 as of Jan. 23. Winning most games by a wide margin, they are still constantly looking to improve their plays both offensively and defensively.

The hard work has certainly been paying off, and the girls are very confident going into the playoffs. The team has even been recognized by The Washington Post this year.

“I was in shock when one of the reporters came to talk to me and the other star players during that game,” senior Cat Correa said. “I had not realized that us just playing our game and having fun turned into something much bigger and special to all of us.”

Correa is a crucial member of the team and is a consistent top scorer. During a close match against Paint Branch High School, Correa led the team with 23 points, ultimately contributing to the 68-51 WCHS win.

One of the biggest contributors to their success as a team is not necessarily always on the court. The team has built up chemistry through spending time with each other every day, which inevitably leads to teamwork and trust—two crucial skills needed for this sport.

“My favorite part about being on the team is getting to spend every day with my teammates,” senior Kamryn Testa said. “I have never been on a team as close as we are, and it feels good to have eleven girls that I consider to be my sisters.”

Led by co-captains senior Kamryn Testa and junior Brittini Martin, the team is ready and prepared for anything to come.

“As a captain, I make sure that the team is always prepared for practices and games, both physically and mentally,” Testa said. “I make sure that we are focused and always working to make each other better. My favorite part about being captain is being able to be a role model for my younger teammates. It gives me a sense of pride that my actions affect my whole team and that I can lead my team in a positive direction now and for the future captains.”

Starting off the season strong, the team is eager for playoffs and ready to face the competition. Hopeful to make it far into the playoffs, the team has been practicing hard and perfecting their skills.

“I think our team, if we keep playing well, has the chance to get very far in the playoffs,” sophomore Parker Hill said. “The end goal is the state championship.”

Eager to end the season as strong as they began it, the team is very devoted to the sport. Everyday, the team is either running drills or playing a game, with only Sundays off. Their commitment to the game, coupled with their love for the sport, is pushing the WCHS girls varsity basketball team to finishing off the season strong.

“We thrive during practice, and I consider them my second family,” Correa said. “We know when to have fun and when to get back to focusing to get things done.”