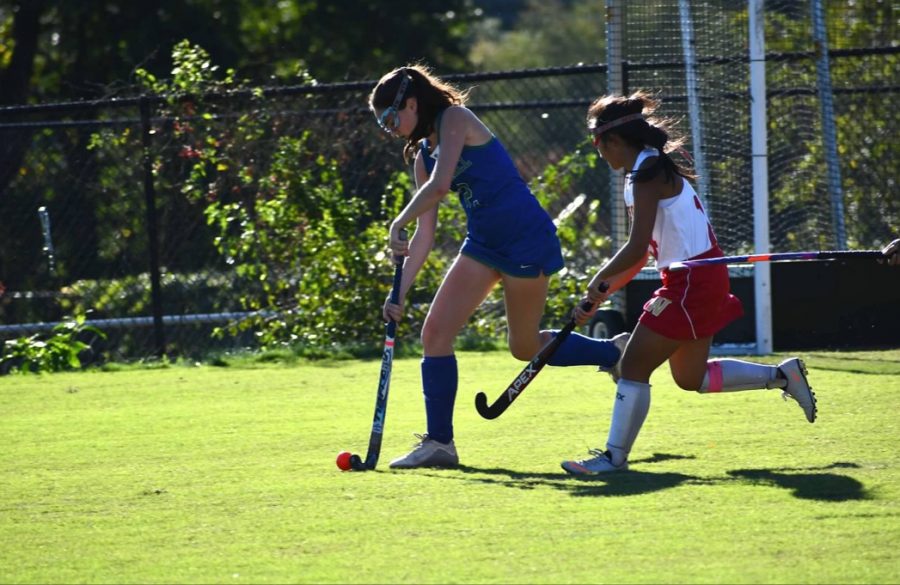 Senior Ellie Shein runs down the field with the ball during the game against Wootton High School. WCHS won the game in overtime.

The WCHS field hockey team is off to a strong start, winning their first 11 games and advancing to the state semifinals for another four games.

Despite losing six seniors this year, the team has come together and is looking to improve on last year’s playoff run.

“Our biggest strength is our ability to work well as a team and give 100 percent,” senior and captain Alexandra Sperling said.

Despite their successful record, the team still has weakness and areas that need to be improved. The team has outscored their opponents 49-11 in their first 13 games, including six shutouts and two overtime wins.

According to Sperling, the team is strong but their biggest weaknesses are a lack of communication on the field and waiting too long to pass the ball during the game.
Even though they have an impressive record, many games were won by one point or even went into overtime.

According to senior Ellie Shein, one of the team’s biggest strengths is their ability to hold on and push through in close games.

The team still faces challenges in every game. In particular, the Wootton game tested the team’s endurance and commitment. WCHS was winning by one goal going into the last five seconds of the game, where Wootton managed to score and tie the game. The game eventually went into double overtime. The game ended up going into shootouts, where WCHS won.

“The Wootton game forced us to play as hard as we can and continued to work as a team throughout the whole game,” Shein said.

WCHS beat Walter Johnson High School Oct. 31 in the regional finals and ended up advancing to the state tournament.

“The captains are very good at encouraging everyone to always give 100 percent while reminding us to still have some fun,” Shein said. “Our coach is very good at addressing the problems that we have as a team and having us do drills to fix those problems. Both our coach and captains lead the team very well and make us the best that we can be.”

Unfortunately, the girls lost the state championship 2-0 to Dulaney High School, bringing their season to a close.