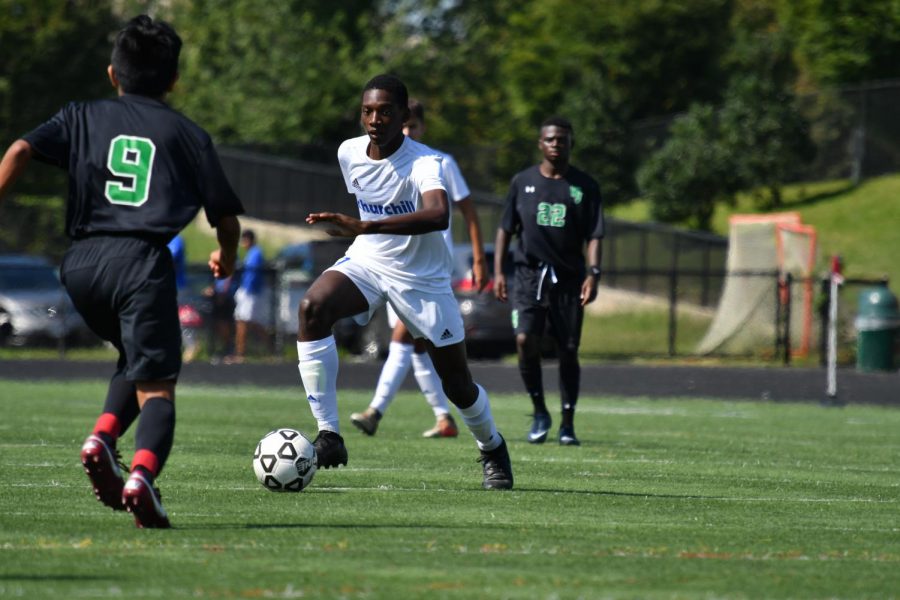 Varsity boys soccer is in the middle of a competitive 2018 season, with eight wins, one tie and two losses.

This is not the first year that the boys are making for a tough opponent on the field. Last season, they finished a strong regular season before losing in the sectional semi-final of the Maryland Public Secondary Schools Athletic Association Playoffs. In their most recent match Oct. 8, the boys lost 2-0 to number one seed Whitman HS.

“So far, the season is going very well and the team is playing great,” senior captain Thomas Young said. “The team dynamic is getting better with each practice. Last year, we had a good dynamic but we just did not have the right pieces on the team.”

The team’s first loss was in a 1-0 nailbiter against Wootton HS, which happened just two weeks prior to their next victory against Wheaton HS. Following this game, the boys began a winning streak, gaining victory against Walter Johnson HS, Bethesda Chevy-Chase HS and Einstein HS.

“This year’s team lacks the one player who can score goals on his own,” coach Arnold Tarzy said. “This has been a more complete team.”

In order to achieve a cohesive dynamic on the field, it is important to maintain positive relationships off the field, and the boys certainly do so.

According to senior and leading goal scorer Aria Ahadpour, they “all bond really well.”
Young, Ahadpour, as well as senior Shawn Diboti-Lobe all agree that the team’s bond is their favorite aspect for being on the team.

“We are a very tight group and we get along very well off the field,” Diboti-Lobe said. “It shows in games because we all play very well together.”

However, team-bonding is only one piece of the puzzle. Another important piece is how each player prepares for each game.

“I usually listen to some Travis Scott or Gucci Mane music to get in the right mindset,” Young said.

According to Diboti-Lobe, he also listens to music to “get in the zone and be focused for game time.”

Last year’s season ended in the second round of the playoffs, but the team looks to improve this season.

“I believe that if we do what we are supposed to do, the results will take care of themselves,” Tarzy said. “I have a strong belief in the potential of this year’s team. We can do great things if we stay focused on what it is we’re trying to do.”