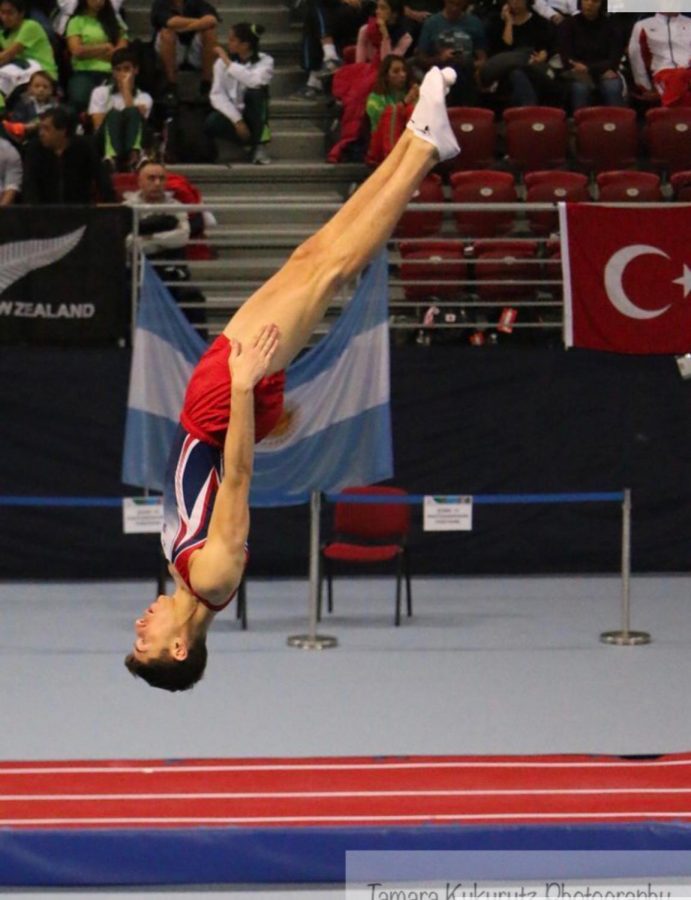 Most kids fondly remember playing on trampolines when they were little, but senior Andrew Winer bounced to the next level.

Winer has been competing in trampoline since he was nine years old, and he represented the USA at the 2017 Trampoline and Tumbling World Championships located in Sofia, Bulgaria. He won 14th place out of 75 other international competitors.

“I am in the elite program of USA gymnastics,” Winer said. “There was a selective process based on three different competitions. One of those competitions I won, and another one I got third place, so that qualified me to represent the United States in Sofia, Bulgaria at the World Trampoline Championships to compete against people from every country.”

“Trampolining” is doing acrobatic or gymnastic exercises on a trampoline for competitive sport. Trampoline made its first Olympic debut at Sydney in 2000. It falls under the greater category of gymnastics.

Winer first discovered competitive trampoline about nine years ago when he attended an open house for a gym in Rockville.

“I used to do trampoline in my backyard with my brother, and they saw I had some potential so they asked me to join a pre-team,” Winer said.

Nine years and many competitions later, Winer practices five times a week, three hours on weekdays and four hours on weekends. He trains at Fairland Trampoline Center, located in Laurel, MD, which is a 45 minute drive from Potomac.

“It’s been really cool to watch him grow as a gymnast over the years, but also as a person,” senior and Winer’s twin sister Ally Winer said. “Gymnastics has really shaped who he is and contributed to his hard work ethic and dedication.”

On top of gymnastics, Winer is also captain of the CHS Dive team and a gymnastics coach at Fairland. With his busy schedule, it’s not easy for him to balance academic work alongside time consuming extracurricular activities other than trampoline.

According to Winer, he has become good with time management over the years since he has been a gymnast for so long.

The flipping and twisting required for trampoline and gymnastics correspond to the movements for diving, as both involve jumping off an elastic surface.

“Andrew is definitely able to be a better coach due to his gymnastics knowledge,” junior and CHS dive team member Eden Max said. “I think that he is able to apply what he knows about gymnastics towards dives that we do off the board to help make corrections and suggestions.”

However, according to Winer, he is by no means a great diver—he is just good at teaching others to dive from learning to flip in trampoline.

As for the future, Winer is uncertain whether or not he will continue trampoline once he graduates from CHS.

“It’s really going to depend on where I go to school next year,” Winer said. “If I go to the University of Maryland I will be able to keep training at my current gym and I’ll try for the Olympics in 2020.”

Although, after nine years of training and reaching a prestigious peak in the jumping sphere—World Championships, Winer may be content to retire.

“Representing the U.S. was an incredible experience because of the camaraderie and having a whole country behind you,” Winer said. “Even though not many people know about it [trampoline], you’re representing a bigger part and not just yourself.”