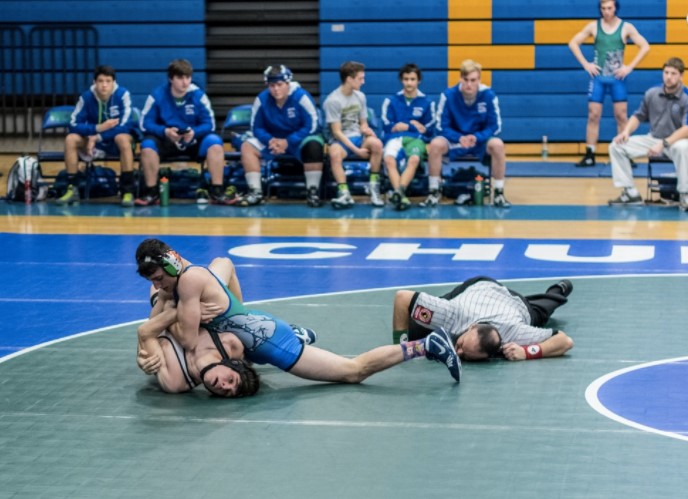 Junior Jack Connolly wrestles an opponent to the ground. Connolly was named “outstanding wrestler” in a tournament againt Paint Branch.

Nine years ago, junior Jack Connolly became a wrestler, a long-standing tradition in the Connolly family. Today, he is ranked third in the Washington Post’s All-Met wrestling team for his weight class and recently won first place at the Jan. 23 Paint Branch tournament, in addition to being named the tournament’s “outstanding wrestler.”

Connolly’s dad wrestled in Illinois, and his grandfather and uncles also wrestled.

“I started wrestling in second grade,” Connolly said. “It’s been in my family forever, so it was kind of inevitable for me to start.”

Earlier this year, Connolly won tournaments at both Richard Montgomery and Chantilly High School in Virginia. Connolly added these impressive achievements to his already outstanding resume from last year, which included finishing fourth in his weight class at the 4A-3A tournament, and being runner-up in both the county and state tournaments.

Although Connolly has had tremendous success throughout his CHS career, it has not come easily. He has fought major injuries over the past three years, which have only made him more determined to reach his future wrestling goal of winning states.

“I missed my entire freshman season so I have to work a lot harder to achieve the goals I want,” Connolly said.

Connolly has faced numerous obstacles, but always with enormous poise and concentration.

“What impresses me the most about Jack is his intense focus,” senior captain Liam Lehr said. “He knows exactly what he wants and everyone in his way finds that they don’t want to be there.”

Though he has a unique determination in striving towards his goals, this characteristic is only one of his
strong suits. It’s the combination of natural ability and hard work that makes Connolly such an advantageous wrestler.

“Jack’s strengths are his extensive knowledge of the sport and his ability to maintain an intense physicality the entire match,” Lehr said. “Jack never tires. When his opponent is gassing, he looks ready for another match.”

In addition, Connolly works hard during practice in order to be prepared for matches, always giving his best effort, compelling his teammates to work just as hard as he does.

Though he has already successfully wrestled for three years, he will continue to compete for throughout the remainder of his junior year and into his senior year.

“Jack has proved himself every year,” Lehr said. “His consistent improvement doesn’t seem to have met its peak yet.”

Connolly will use his previous experience from last year’s state championship and MCPS tournament
to guide him.

“My approach hasn’t changed too much,” Connolly said. “I just worked hard in the offseason to fix any imperfections to do better this year than last.”