Athlete of the Month- Mitchell Welter 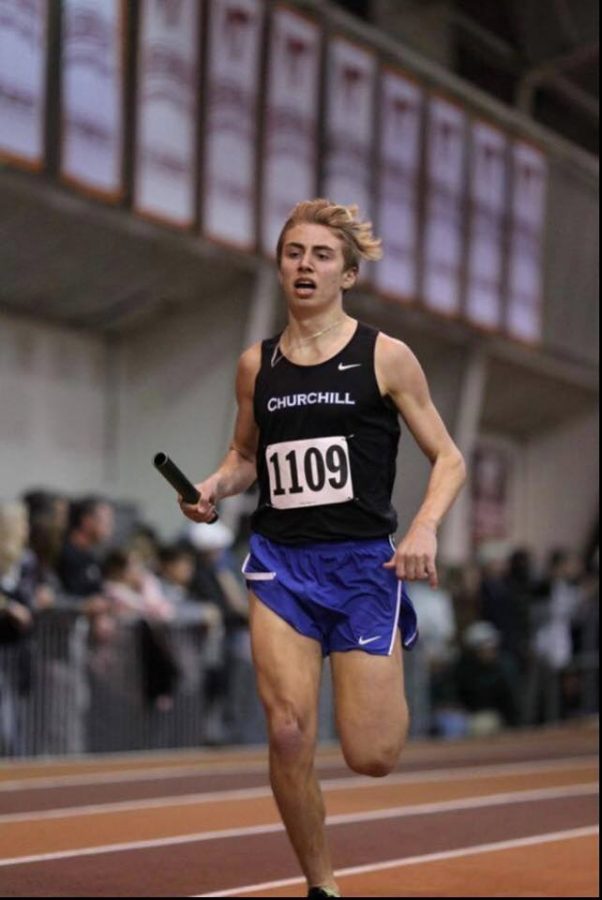 Welter sprints towards the finish line during an indoor track race.

For some, running is a chore. It’s just something you do to get into shape. For Mitchell Welter, it’s the opposite. From cross country in the fall to track in the winter and spring, Welter runs year round.

Welter ran cross country and indoor track this year, and now is running outdoor track. Welter’s key to a great race is keeping himself calm.

“Honestly my pre-race rituals are pretty standard, warming up 45 minutes to an hour before I race, doing drills and stretching,” Welter said. “I think the biggest thing that I do different from everyone is that I just try to have fun with it. So many people take the sport too seriously and put too much pressure on themselves to do well. I like to try to have fun and enjoy competing, which makes it a lot less stressful.”

Welter garnered praise from his head coach, Paul Jacobson. Jacobson relies on Welter as one of his top runners, and is impressed with his dedication to the sport.

“Mitch is the best distance runner,” Jacobson said. “He loves the sport. He knows more about the best runners than I do. He even went to New York to watch the indoor championships.”

Along with his fifth place finish at counties, Welter came in second in the East Coast Regional 5K in North Carolina this November. He has cut almost four minutes off his 5K time since freshman year, going from a 19:54 to a 15:59.

“Cross country is definitely more of a team sport than track,” Welter said. “You depend on the other runner on your team doing well in order to win an invitational or dual meet.”

Welter’s season continues into the winter, where he runs indoor track. He put up several impressive performances this season including running a 9:57 3200m at the state championships, good for 6th place. He finished in the top five in five other 3200m races over the season.

“The biggest goal we have for this outdoor season is winning the state meet in the 4×800,” Welter said. “Our relay is almost all seniors and we’ve come such a long way since freshman year. “It’d be really cool to get first. Also that second place finish during indoor really had our guys hungry for gold.”

The team has bigger goals in mind for the relays as well, looking to be remembered at CHS for years to come.

“Qualifying for Penn relays in the 4×800 in late April is another huge goal our team has,” Welter said. “There’s also a small chance we can get faster enough to try and set the school record, but that would most likely happen towards the end of the season.”

Welters is part of a group known as “The Wolfpack,” which includes seniors Welter, Thomas Winkert, Michael Hughes, Jason Shefferman, Josh Freilich and Jacob Grant, as well as junior Matthew Goldsmith. The seniors have been running together since they were freshman. With members performing at high levels throughout their running careers, and improving in wide margins, it has definitely served as a great incubator for Welters talent.

“He has a great team around him in the Wolfpack,” Jacobson said. “He has guys that run with him day in and day out. That’s what makes him great.”

Welter, also a captain of outdoor track team, is beginning to inspire the next generation of runners.

“He’s definitely passing along his wisdom,” Jacobson said. “The next group his ready to take over.”

Welter’s CHS career ends after the spring season, but he will still continue running.